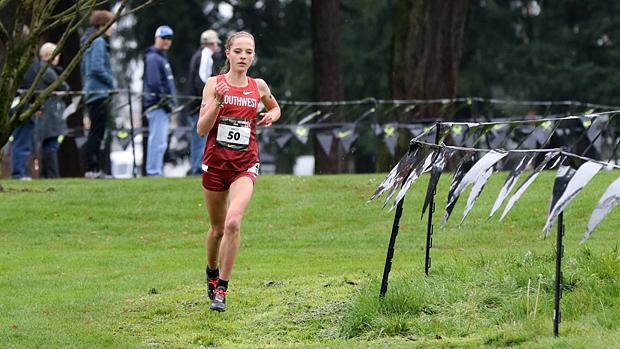 Brie Oakley's race was mostly an exercise in solitude. Photos by Alan Versaw.

NXN 2016 did start out especially well for Colorado.

Mountain Vista's girls were the lone Colorado team to secure an auto qualifier to the annual festival of all that is great about high school cross country. And, the count of individual qualifiers was down a bit from 2015's prodigious total.

But, things did start getting better. Most notably, they got better when Broomfield nailed down one of the four at-large selections to NXN. A very nice season that had seemingly ended with a performance just a notch below expectations would get a shot at some redemption.

Any further improvements, however, would have to wait until race day.

Once the gun for the girls race went off, however, improvements started coming in a hurry. Each of Colorado's three individual entries--Brie Oakley, Lauren Gregory, and Quinn McConnell--staked out places near the front of the field.

Brie Oakley, however, wasn't about to leave anything to be decided anywhere close to 3.1 miles. By the mile point, Oakley was already building a commanding lead. By the midway point of the race, Oakley's lead was--for all intents and purposes--insurmountable. Even with an unplanned meeting with the soggy Portland soil, Oakley continued to build her lead throughout the race.

When the clock stopped on Oakley's race, it showed a time of 17:10.1, giving Colorado back-to-back individual titles for the girls on NXN.

If that had been all the success Colorado had enjoyed at NXN, it would have been a solid day. 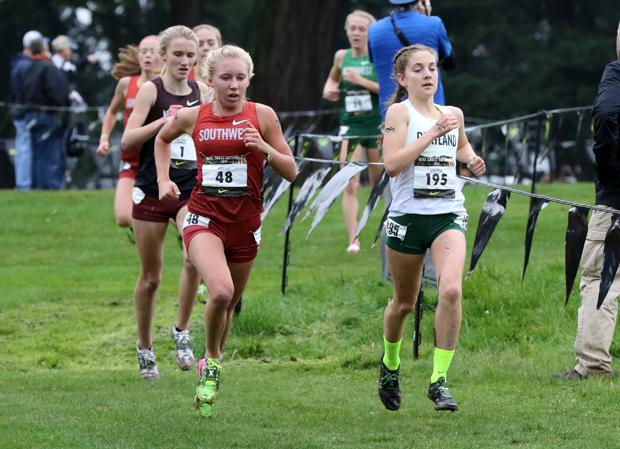 Lauren Gregory, who stayed several places off the lead in the early going moved comfortably to the lead of the chase pack by about the mile mark. The next mile was spent breaking the will of Kelsey Chmiel. The last mile was spent in a back-and-forth exchange of figurative blows with Ember Stratton. In the last 20 meters, Stratton had more fuel left in the take and was able to surge past Gregory for second.

Still, a third for Gregory was a very nice finish and an exclamation point on about as great of a season as you could ever wish to have running in the same state as Brie Oakley.

Quinn McConnell was unable to hang onto the top-10 position she had held through most of the first half of the race, but the Peak to Peak sophomore did hang on well enough to finish 17th in a field of the nation's finest.

So, in just a tick over 18 minutes, Colorado had secured three NXN All-American finishes in three tries. And, with all settled, it was time to direct attention to the team battles.

Madison Mooney and Ivy Gonzales got things started for Broomfield at just under 19 minutes on the soft NXN course. Jenna Fitzsimmons answered for Mountain Vista, barely over 19 minutes.

Then it was Katelyn Mitchem at just under 19:20, answered by a Mountain Vista pair of Sarah O'Sullivan and Mauren Fitzsimmons. Though the advantage to this point was Broomfield's, there was still plenty of room for it to go either way between the two Colorado titans.

In the bigger picture, Broomfield secured a 7th-place team finish while Mountain Vista claimed a 13th. Both teams had inched toward the top of the field a little in the final mile of the race.

Both of Colorado's team entries had acquitted themselves nicely.

It would be the better part of an hour before the boys would take the course for their race. In that time, the sun managed to find a few more gaps through the low cloud ceiling and boost the temperature by about five degrees. The sun, however, did little to nothing to dry out the course or otherwise improve the course conditions.

A wave of Midwest blue singlets at the front in the early going would eventually give way to an orangish-red kind of hue at the front. 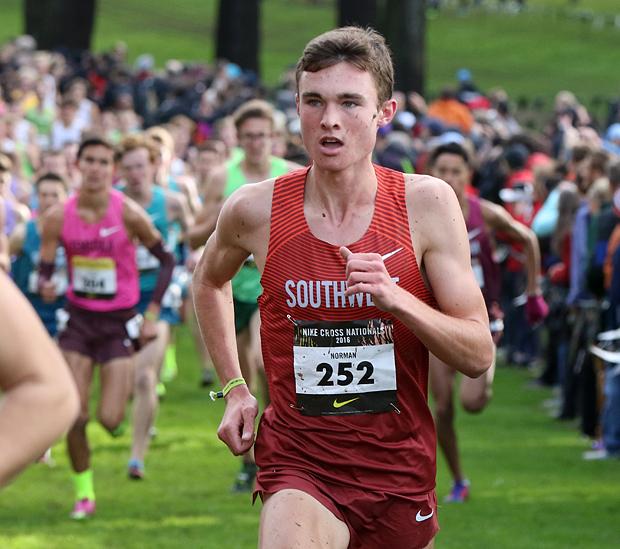 One of those individuals wearing a shade of orange or red and moving up through the field, picking off five blue singlets along the way, was Colorado's Tanner Norman.

Over the final half mile, Norman and about three others exchanged places like a busy day on the Exchange floor. A late pass by Utah's Joe Benson bumped Norman to ninth, but Norman got 8th back with a final surge that took him past American Fork's McKay Johns. Norman's 15:46.3 gave Colorado it's fifth top-ten boys finish in NXN history (Noah Shannon, Spencer Wenck, Cerake Geberkidane, and Eric Hamer preceded Norman with that distinction).

Monarch's Isaac Green closed out Colorado's day at NXN with a 41st-place finish in 16:17.

When the Voodoo Donuts truck on-site had run out of goods to sell, Colorado had claimed three top-ten individual finishes and one top-ten team finish. It was a grand day in Oregon for the Centennial State.