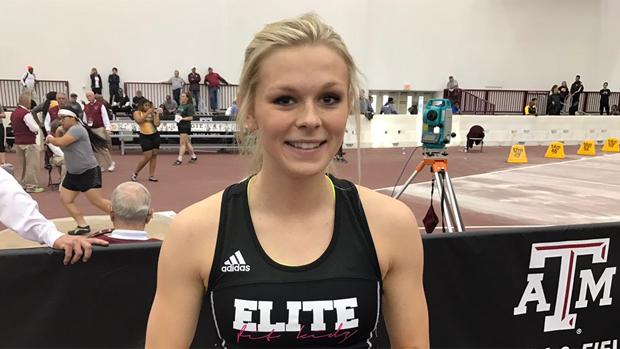 Emily Sloan had a lot to smile about at the end of her day of hurdling.

It took all of about 17 seconds for Emily Sloan to send a shot heard around the nation. First in prelims, and then in finals, Sloan disposed of the assembled competition--considerable though it was--to claim top honors at the Texas A&M High School Classic and regain the #1 national ranking for the 60 meter hurdles with a blazing 8.54 in finals.

On a weekend where several Colorado athletes struggled to match their performances at altitude, Sloan had so such issues. Sloan's 8.54 is her fastest of the season to date and the fifth-best mark of her high school career. All of her better marks were achieved late in last year's indoor season.

Although's Sloan's 60 meter hurdle win was clearly the Colorado highlight of the competition, it was far from the only good news to emerge out of College Station and trickle its way back to Colorado.

Kylie Davis was next in the Colorado order of things with a 9.25 in prelims that came two places short of advancing to hurdle finals.

Maya Evans scored a second place in the long jump with a season-opening mark of 18-4.75. Evans also ran 7.96 in the prelims of the 60 meter dash.

Taylor Watson's 7.82 in the 60 meter dash prelims was solid, but not quite enough to push her into finals.

Jordan McCurdy's 5:17.73 mile held up for sixth place and marked a PR for the Cherry Creek junior. Perhaps this is an indicator of bigger things in the near future for McCurdy.

Note: I'm still in search of an action photo of Sloan from Saturday's hurdle action. If a good enough one comes my way, I will replace the current cover photo on this article. Action photos > mug shots.