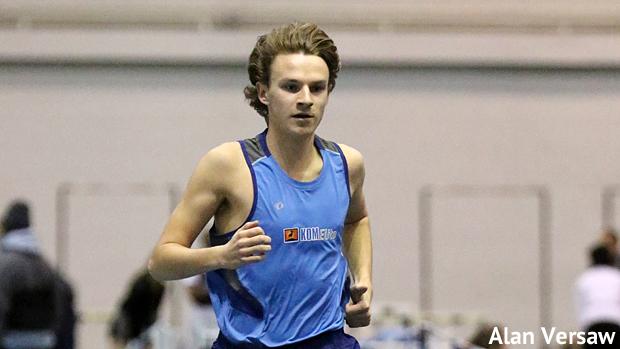 Ethan Powell's winning mile time of 4:39.96 from last Sunday seems kind of pedestrian until you consider the venue.

As far as places for running a distance track race go, you can scarcely pick a more challenging venue than the Cadet Field House at the United States Air Force Academy.

Among other indoor venues around the nation, only the one in Flagstaff, Arizona, comes close in elevation to these four.

Each of the other indoor facilities in Flagstaff, Laramie, Gunnison, and Alamosa, however, are 200 meter type tracks. The indoor facility at the Air Force Academy, on the other hand, is six laps to a mile, or about 268 meters to a lap.

So, you could be excused for thinking that the extra size (meaning wider turns) of the Air Force Academy track would make it the favored distance venue--if such a description is not immediately bound up in contradiction--among the high-elevation indoor facilities in this nation.

You could be excused, but you'd still likely be wrong.

Talk to anyone who has run a distance race at the indoor track at the Air Force Academy and they will tell you about the dry air and the coughing spells they'd experience off and on for days after the race.

And, this begins to get at how the Air Force Academy indoor facility is different, and perhaps perniciously so, from other indoor tracks.

Let's start by saying that one day of utility bills at the Air Force Academy Cadet Field House would probably cover the utility bills at my house for the rest of my lifetime. Unlike (mostly, at least) the other high-altitude indoor tracks, the Cadet Field House isn't just a track. There's a hockey arena and a basketball/volleyball arena right there as well. And the entire facility sits, literally, in the shadow of the Rampart Range.

Keeping this place a comfortable 70 degrees of Fahrenheit is an enormous undertaking. All the more so when you're trying to keep the ice surface frozen at the hockey arena. It probably doesn't help that there's all of one wall between the track and the hockey arena.

I'm going to hazard a guess that it is this unique situation that leads to the famously dry air at the Cadet Field House track. And, that famously dry air is the bane of a distance runner's existence. The air along Colorado's Front Range is dry enough to begin with, but it gets a little drier still when made to warm the interior of the Cadet Field House to something like a uniform 70F.

All-time top performances in the Cadet Field House belong to some fairly distinguished names in the history of running. Frank Shorter owns the CFH 3000 meter record at 8:16.50. Emma Bates holds the women's record at 9:28.18. Mile records belong to Bryan Berryhill at 4:09.20 and Laura Thweatt at 4:49.98. None of those records are in danger on Saturday at the Air Force High School Indoor Open--of that we may be certain.

But, as a yardstick on those times, Bryan Berryhill ran a personal mile record of 3:56.52. Emma Bates ran a collegiate best indoor 3000 meters of 9:11.98. We conclude, then, that the Cadet Field House exacts a toll on performances. All the more so if a runner is not careful to keep his or her pacing under tight control through early stages of the race.

The full scope of the toll exacted is suggested by the NCAA altitude conversions assigned to performances at the venue. A 5-minute mile is converted to a 4:48.67 sea-level equivalent. A 10-minute 3000 meter effort is converted to a 9:34.06 sea-level equivalent. At least they make those conversions at the collegiate level. Nobody really bothers at the high school level.

And, there are those who will tell you that even those NCAA conversions are not generous enough due to the dry air at the venue.

Running a distance event at the Cadet Field House means adjusting your sights and strategy to the conditions. What's appropriate, and achievable, most other places is neither at this location.