Middle Distance Heats Up the Track 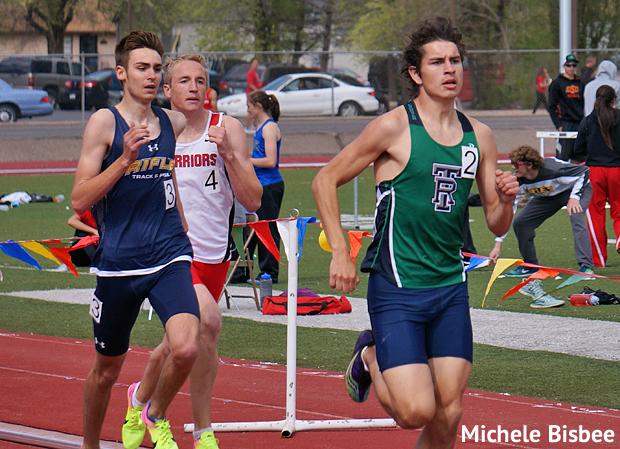 As the noon hour hit, the sun decided to peak through the clouds and, coincidentally, the girls were taking to the track for the 1600. Whether it was the heat from the sun, the heat radiating from the track, or heat from the fast racing, but jackets were coming off and the sunscreen was going on.

Soleil Gaylord traded snowshoes for racing spikes, and went right to the front to take command of the race. Though with few peers on the Western Slope, she still was not alone for her four laps around the oval. Doggedly on her shoulder was ThunderRidge's Shae Henley. As the race continued, it became apparent that Henley was not going away and was looking strong as the girls came out of the final turn.  Henley had one more gear available and stormed down the finishing straight to cross in 5:12.36 a new best that puts her 3rd in the 5A ranks. Gaylord crossed shortly after, also in a personal best of 5:16.15 and strengthened her grip as the top 2A time.

Both of the recently crowned Junior National Snowshoe champs showed running around in the snow did nothing to tire them out as Gaylord and GJ Central's Jarod Leblow both prevailed in the afternoon's massive 3200 fields.

The hottest contested race on the track; however, ended up being the boys 800. As good as it was on paper, it was even better as it played out. ThunderRidge's David Moore took on leading privileges at the break, closely followed by, well, everybody.  At the half way point the race seemed to be down to a breakaway group of three still lead by Moore, but with Rifle's Jack Rubalcave and Central's Talon Berta close on his heels.  Rubalcave made a move to pass Moore and Berta seemed to be losing touch with them, but on the final stretch Berta made his move and ran everyone down to finish in 1:57.07.  Rubalcave hung on with the leading 3A mark of 1:58.20 followed by Moore (1:58.31).  Also, storming down the final straight very nearly capturing the other two was Montrose's Ian Meek with 4A's second-fastest mark of 1:58.63.