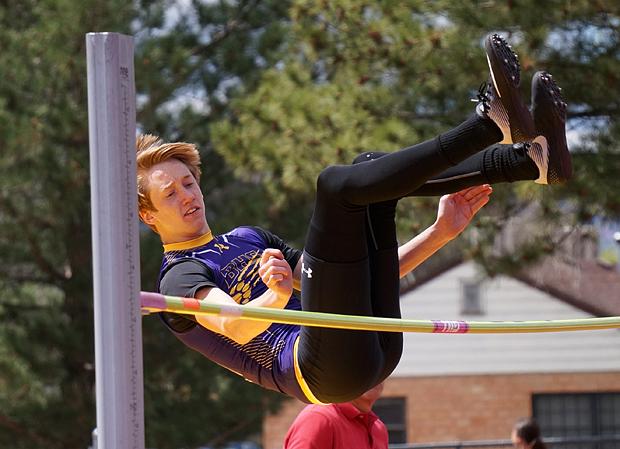 Red and black along with some blue are common on the Western Slope, but Prince would be proud of the amount of purple reigning on the track. 3A Bayfield and Basalt were joined by 2A's West Grand to mix up the color pallet.

Bayfield's Brian Meshak sprinted his way to a 2nd and 3rd in the 100 and 200 dashes. Taking hurdle duty was Carl Heide with a first and second in the 110H and 300H, respectively.  Dawson Heide and Dax Snooks came away with 2nd and 3rd in the High Jump, and Sam Westbrook took home top honors in the Shot Put (50-2.25) and 4th in the Discus.  In all, the Wolverine's just missed second in the boys team standings by a mere half a point, 73.5 to 74 to ThunderRidge. Glenwood Springs took top team honors, but only by seven points at 81.

On the girls' side, Jordan Lanning was a bit of everywhere, placing second in the high jump, 3rd in the 300H, 4th in the 100H and 5th in the TJ.  Teammates Mikayla Barnes placed 3rd in the Shot Put and Amber Johnson 4th in the 100.

The West Grand and Basalt girls each put together formidable foursomes to capture some big relay points against the bigger schools.  West Grand got 3rd in the 4x100 and Basalt 2nd in the Sprint Medley.

Telluride girls made it a small school 1-2 in the Sprint Medley with the win and followed right after with 3rd in the 4x800 in 10:23.17 - currently 27 seconds faster than the next 2A team.  Rifle's girls ran runner-up to ThunderRidge in the 4x100.

Montezuma-Cortez stayed ahead of Montrose and just lost to ThunderRidge in the boys 4x400 in 3:31.08.