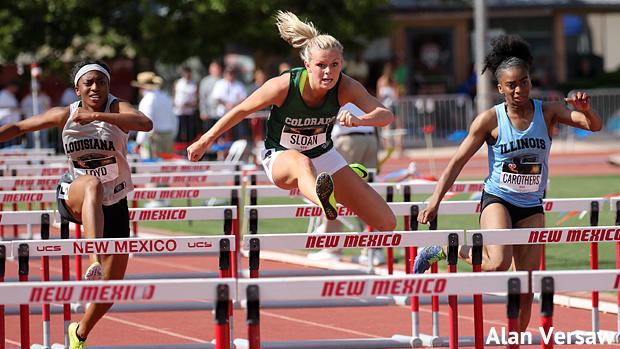 Emily Sloan snared an early lead in the 100 hurdles and fought off the pursuit all the way down the straight.

By the standard of most recent years, it was a successful outing for Colorado at Great Southwest, 2017. Or, at least it was if you set aside thoughts of the multi events (where Colorado had no entries this year) for a moment.

Most notable among the Colorado results were double meet titles for Arria Minor and Emily Sloan. 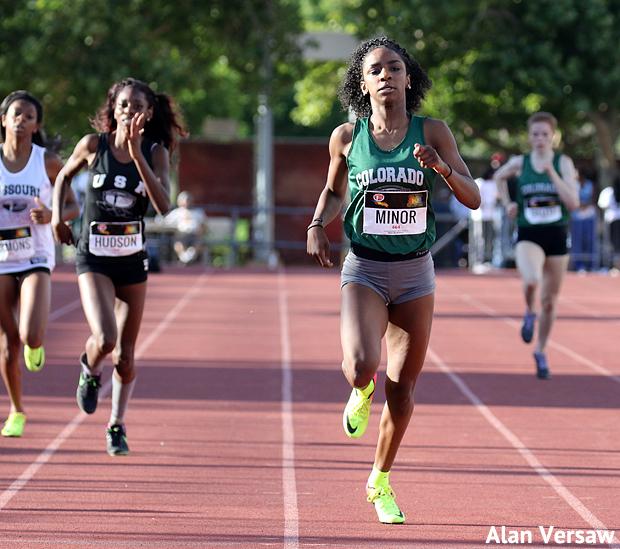 Minor left nothing to doubt in either the 200 or 400, setting an early lead and commanding the rest of the races from the time of first lead forward. Minor's 52.38 400 left a mark in the form of a meet record, erasing a mark that had stood for roughly a quarter of a century.

Emily Sloan faced a tight battle from Kyah Loyd of Louisiana all the way down the straight but managed to maintain her small lead to the finish just the same. Sloan's winning time of 13.78 didn't mark a season-best, but it was a winner just the same. When it comes to making lifelong memories, wins usually trump PRs. PRs come and go, but wins stay on the books.

Sloan actually trailed coming off the turn of the 300 hurdles but took over the lead down the straight, claiming a very narrow 42.14 to 42.23 win over Arizona's Jae'Nisa Heckstall. 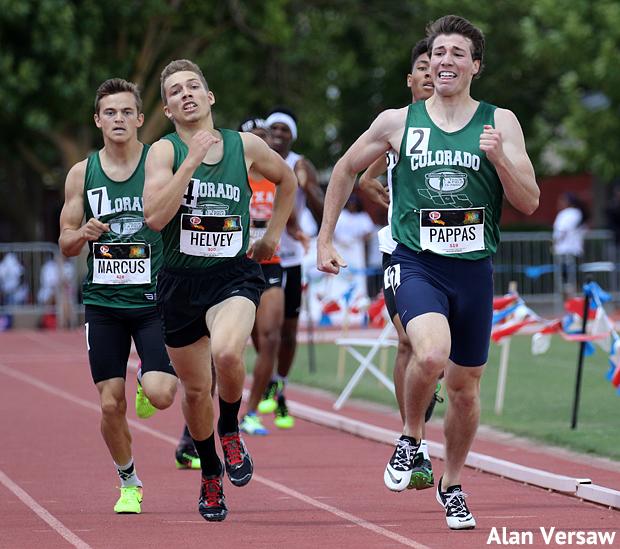 Colorado picked up other Saturday event titles from Maya Evans in the long jump (20-3.25), a speedy girls 4x100 of 44.97, Brandon Pappas in the 800 (1:55.60), and Jequan Hogan in the triple jump (50-4.75). The boys 800 was especially noteworthy in that Pappas took the win, but was also followed in close succession by two of his Colorado teammates, Brock Helvey and AJ Marcus.

Relatively few Colorado athletes came home with PRs, and there are probably a few reasons for the phenomenon. Among the candidates for consideration are the following:

For many of Colorado's delegation, Great Southwest represented an ending of the season. Others, however, will go on to some combination of USATF-JO, Junior Nationals, and New Balance Nationals Outdoor.

Check back soon for a Colorado photo gallery from Great Southwest!