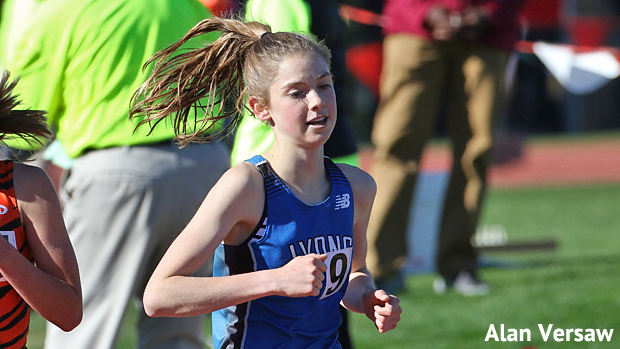 It's not quite cross country season yet, but you wouldn't know that from Georgia Barone's race this morning. File photo.

One might be forgiven for imagining that Lyons, Longmont, Erie, and Silver Creek were having an unofficial time trial at this morning's running of the Sunrise Stampede 2 Mile and 10K in Longmont.

Needless to say, most of the high schoolers were in the 2 Mile event, but I'll eventually get back to one who wasn't.

After Adams State alum Alicia Nelson got through putting her stamp of ownership on the two mile race, it wasn't too many places later that the high schoolers started pushing their way through the finish.

The first high school finisher was Zoe Baker of Longmont with a time of 12:18. Trouble is, I'm not quite sure which high school Baker will be running for this fall. Somebody appears to have picked up a find.

Georgia Barone, Emily Condon, and Cami Fischmann also finished in under 13 minutes. That's one each for Lyons, Erie, and Silver Creek. For the record, Condon has been busy racing this past week.

Isaac Roberts of Lyons narrowly led the high school finishers among the men with a time of 10:38. Erie's Jamison Cartwright came in next at 10:39.

If you're looking for results that might have a big impact later this season, though, try out Simon Stone's 10:57. Stone is a sophomore at Lyons this year. Things may not stay this way through the season, but Stone beat Lyons' presumptive #2 of Colton Jonjak-Plahn. The latter ran 11:06.

For those wondering about the Silver Creek boys, they appear to have packed it up a little today. James Lee and Logan Simington were 11:04. John Moroney and Brock Dykema were 11:08 and 11:09. Zack Beckwith and Henry Terhaar were both under 11:30. That appears to be a good jumping off point for the season.

What you need to know about the 10K races was that the women's race was won by a high school freshman from Rawlins, Wyoming, in 35:42. No, none of that is a misprint. Sydney Thorvaldson is the name. Remember it well. Grace Ping might do well to remember that name.