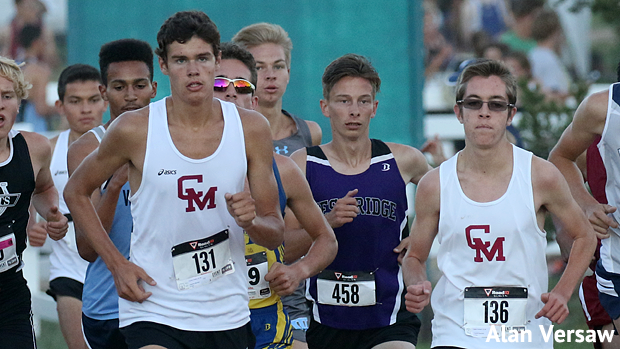 Thomas Chaston and Walker Rudolph found themselves at the front of another race today, but this time with less company. File photo.

There were supposed to be two meets today. As it turns out, there was only one. Lightning put the Air Academy Kadet out of commission for 2017.

Those attending the meet probably saw it coming in the open races (in a bit of a turn on the usual order, the Nighthawks Invitational ran the open races first, before the varsity races). Led by Ben King's 19:21, Cheyenne Mountain snared 11 of the top 12 places in the open boys race. It didn't get much different with the girls. Dawson's Lucca Fulkerson, a legitimate varsity contestant in almost any meet, took first in 22:17 before Cheyenne Mountain nailed down five of the next six places.

If you are wondering, "What happened to those scorching times you were predicting, Coach Versaw," it may help to learn I'm wondering the same thing. My best theory at the moment is that it must have been rather toasty, but I'm open to alternate explanations from those on the ground at the meet.

The script varied little when it came to the varsity races. The onslaught continued apace.

Led by Thomas Chaston (16:53) and Walker Rudolph (17:11), Cheyenne Mountain found themselves gobbling up six of the top nine places. The time puzzle continues; only three boys in the entire race managed to drop below 18 minutes for the course. In the final tally, Cheyenne Mountain had 21 team points to 73 for second-place Berthoud.

Anna Warmack helped make it a clean sweep of all the meet varsity titles for Cheyenne Mountain with a winning time in the varsity girls race of 20:10. That kept her several seconds ahead of a pair of freshmen in second and third--Lexi Emerson of George Washington and Riley Buese of the home team. Cheyenne Mountain's 30 team points beat second-place Denver East by 34 points.