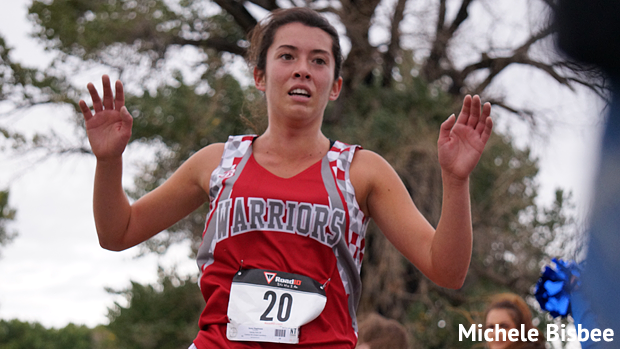 Ivory Espinoza added to her growing collection of meet titles with a win at the Anna Banana.

It is not certain when Fruita Monument last hosted their home cross country meet within Fruita proper.  Since the race has been the Anna Banana Memorial Wildcat Invitational it has been run at Connected Lakes State Park in Grand Junction.

Since then, the Anna Banana has slowly grown into one of the largest cross country affairs on the Western Slope--helped, in a large part, by its reputation as a very fast course.  Confined geographically, however, the Connected Lakes venue is not able to accommodate more racers nor their accompanying fans.

Faced with the decision to stay and further limit the race or change the location, FMHS head coach, Jay Valentine, decided it was time to bring the race back to Fruita.  What better place than where Valentine raced as a Wildcat in the early 1980's, Snook's Bottom?

Sandwiched between McInnis Canyons National Conservation Area and the Colorado River, Snook's Bottom is an Open Space Park managed by the City of Fruita.

Like Connected Lakes, the race course sports a gravel and paved road surrounding a small lake.  Different from the previous location, this runs more like a traditional cross country course.  In Coach Valentine's words, "Track is in the spring".

It may not be as blistering as the old one, but it isn't slow either.  The first mile, in all actuality, is probably faster. The introduction of a hill shortly thereafter and over a mile of single track through high-desert terrain make it a little more challenging, but the last ¾ mile gets back to fast again.