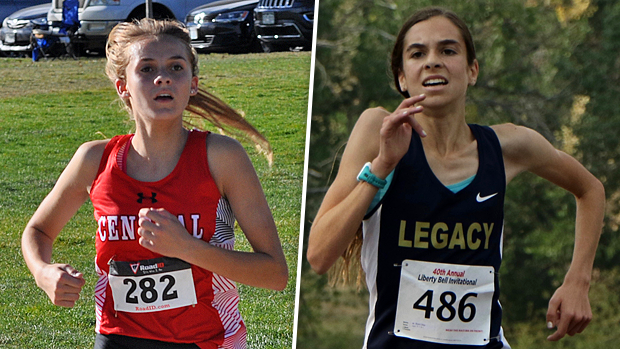 Something will have to give on Friday when Aubrey Frentheway, last year's Thornton Invite champion, meets Brynn Siles, this year's rival to the throne.

If you can recall back as far as this time last year, you will recall that it was a very tight battle for boys team honors at the Thornton Invitational, while the Arvada West girls had their way with the field.

Well, Arvada West is bringing two very good teams this year and may be fixing to finish the job they didn't quite complete last year.

The entire contingent of Fort Collins 5A teams--Fort Collins, Rocky Mountain, Poudre, and Fossil Ridge--is coming down for this meet. Sometimes, it's easier to get everyone together on neutral territory. Overall, the Fort Collins schools tend to be a bit stronger on the boys side than the girls this year, but there's plenty of reason to be concerned on both sides of the aisle. It does not appear from the list of entries, though, that Rocky is bringing the full regular varsity.

Laramie is bringing their their Plainsmen down to wreak some havoc as well. What they supply should help make up for what's missing from Rocky Mountain.

Prairie View and Legacy, two teams that have been running rather well this fall, also bring teams that should add interest to the mix. Eaglecrest is another team with a serious contribution to make.

The Thornton Invitational has ratcheted things up a notch or two in terms of interest this year.

Honestly, some of the small schools showing up are in for some rough sledding at this one. It might be a good week to took a hard look at effort and dismiss the team standings.

Individually, Aubrey Frentheway of Cheyenne Central is back to defend her title. Defense will be difficult, however. Most notably, Frentheway must figure a way to deal with Brynn Siles, who has been tearing up meets right and left here in Colorado this fall. Wyoming's girls are on a nice run of late, but Wyoming's biggest guns haven't yet stared down Brynn Siles.

Also adding interest to the girls race are names like Luna Slater, Claire Pauley, Sydney Teslow, Stephanie Carrasco, and Laramie's Abigail Whitman. This being Carrasco's last home invitational, she may feel like she has more on the line than most.

As good as the race figures to be on the girls side, it's likely better on the boys. Laramie has two ringers in Albert Steiner and Philip Henry. Eaglescrest counters with Mason Brown. Fort Collins throws Joshua Krafsur into the ring. Fossil Ridge sees that with Blake Hubert. Arvada West? Colin Berndt, of course. Montrose brings Evan Graff to the fray. Bryce Pietenpol wears Poudre blue. Ryan Lehmuth carries the banner of the small schools. And so it goes on down the line.

You could be forgiven for looking getting a little on the edge of your seat in anticipation of this meet. Just don't tip your seat over in the middle of class, please. School administrators tend to get rather in a lather about safety issues like that these days.