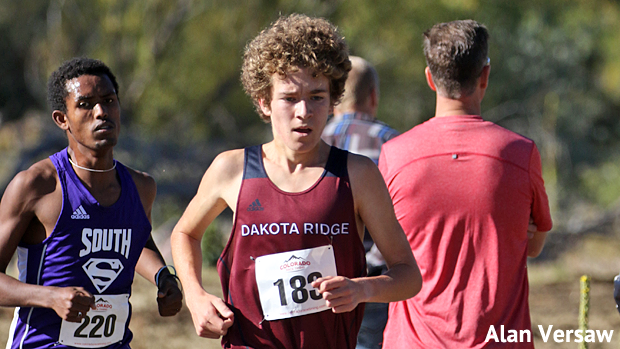 Austin Vancil reprised his 2016 effort with a win in Jeffco 5A this year. File Photo.

There is a lot of league meet coverage, both summaries and actual on-site reporting, forthcoming here, but I need to start with the Jefferson County 4A/5A meet.

It seems there's some egg on my face about a badly missed projection for the 5A Girls varsity race. Nowhere in my preview of that race did I mention the eventual winner--Carley Bennett of Lakewood.

First, a hats off to Bennett's big win. Second, I have no explanation for why I missed her in the preview. The ongoing danger of writing meet previews is missing things like that.

Bennett's 18:45 on a warm, windy day is an outstanding effort. It was also an 11-second margin of victory over Claire Pauley, who is no pushover as a competitor.

The team title fell as expected into the hands of Arvada West. After getting four into the top seven, including what was something of a season breakthrough effort for Civianna Gallegos, the Wildcats were never seriously threatened. Lucy Schroeder closed out the A West scoring in 18th, giving them a team total of 37.

That was just over half the total for second-place Dakota Ridge. Arvada West rides a crest of momentum into regionals.

Equally as dominant in the 5A Boys race as Arvada West was in 5A Girls was Dakota Ridge. This, too, falls under the heading of expected. Dakota Ridge came into the meet with a recent history of holding their own with the very best teams in the state, and they looked all of that role on Thursday afternoon.

Austin Vancil and Connor Ohlson went 1-2. Mark Testa added a fourth. The scoring was complete with Ben Morrin in 11th. 27 points. Arvada West was a solid, but distant, second at 71 points.

For Vancil, the win marks back-to-back Jeffco 5A individual championships. And that's the kind of standard very few people ever attain. This year's effort of 15:55 was 19 seconds faster than last year's.

Team-wise, the Jeffco 4A contests promised to be tighter than the 5A races. They definitely lived up to that expectation.

Standley Lake managed to get through a rugged, back-and-forth battle in 4A Boys holding a trophy high, but their 62 points were threatened by both D'Evelyn and Evergreen with 73.

As expected, Cole Sprout dominated the individual race with a 15:56 that probably involved a fair measure of coasting. Lucas Jordan and Drew Seidel went 2-3 before a gap of more than 30 seconds to fourth. Cody Dewitt got Standley Lake started on their collection of points in fifth.

Tiya Chamberlin found her way to the winner's circle of the 4A Girls race at 18:52. Addi Iken was eight seconds behind Chamberlin.

It was, however, the Golden team that held the trump cards in the team scoring. Golden didn't get more people into the top ten than anyone else, but the trio of Mary Fox, Jadyn Goodrich, and Rachel Goodrich did match Valor's total of three in the top ten. And Golden won the tie breaker with 18 top-ten points to Valor's 21. Valor was, however, the only team with three under 20--Keely Jones, Taylor Whitfield, and Riley Irwin provided that little highlight of the day.

Better still, Golden finished off their scoring with alacrity. Madelynn Gerritsen was 14th and Maricel Mequi 19th, giving the Demons a total of 51. Valor managed to keep it as close as 71, but Golden heads into regionals with momentum in their corner.

3A D'Evelyn impressed with a total of 77 points and figures as a team to be watched closely in the coming weeks as well.