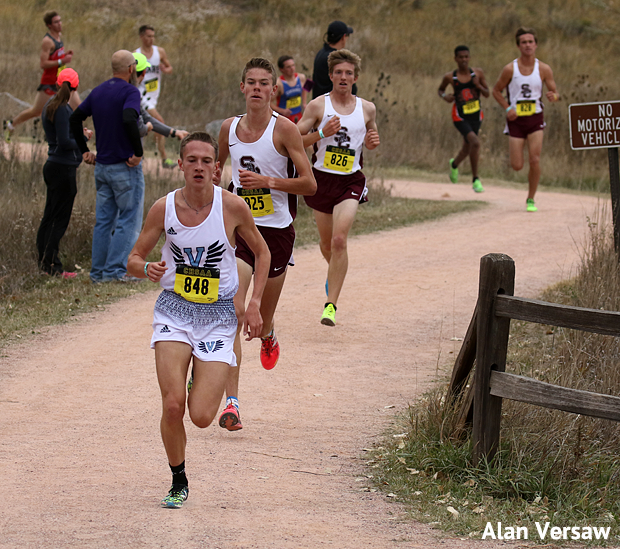 At the low point of the course, Cole Sprout was leading a trio of Raptors.

Make no mistake about. In terms of suspense, there was no state meet race yesterday that matched up with the 4A Boys race. Both in terms of pre-race intrigue and on-the-course suspense, 4A Boys delivered big and exactly as advertised.

Going in, you could make you case for any of Niwot, Centaurus, Silver Creek, and Palmer Ridge. If you liked living a little dangerously, you might have tagged Air Academy as well.

One of the coolest things about the race is that those five teams finished that way--as the top five teams in the 4A Boys race. Nobody fell apart in any telling sort of way. The spectators got full value, and then some, for their $10 parking fee.

Early in the race, the field seemed content to gather around Cole Sprout and let him dictate what the pace would be. Sprout obliged and kept the pace solid, but by no means excessive. In the end, that probably helped keep all the team contenders in the race. Had Sprout gone for a more blistering initial pace, we probably would have seen more of the aftermath of competitors blowing up on the course.

Sprout's race plan was simply "to go out with the top guys, and feel out that pace, and that second, third mile... pull away." It worked out exactly as he envisioned it.

But, even with Sprout controlling the pace up front, there was a story working out in the places just behind him.

At the midway point, and low point, of the course, it was entirely evident that Silver Creek meant business. Brock Dykema and James Lee were still nipping at Sprout's heels. Logan Simington was close behind, and Eliott Cassidy was in the top 10 or 12. Also lining up in a strong position, but well back of the Raptors, were Niwot and Palmer Ridge.

A long, gradual climb to the west end of the course remained, but one could be forgiven for imagining that Silver Creek had things pretty well in the bag.

It was over that long uphill from east end to west end of the course that Niwot fell mostly out of contention for the team title and Silver Creek fell back into within striking range of the patient, but persistent, pursuit of the Palmer Ridge team.

In the final half mile, there were two teams left with enough in their legs to make a sustained final charge. Those two teams were Palmer Ridge and Centaurus.

Palmer Ridge leaders Ryan Matson and Kieran Nay trimmed a couple places each over the final mile. Centaurus saw bigger drops in their point total--Cooper Brown went from 23rd to 16th, while Torey Puckett surged from 45th to 22nd in the final mile--but the late-in-the-race surge was not enough to close the gap on the speeding Bears.

Simply stated, the positioning advantage of Palmer Ridge at two miles was too substantial for Centaurus to overcome.

The final tally left Palmer Ridge with 77 points and Centaurus in second with 100 points. Unable to hold their top position over the final mile, Silver Creek slipped to third with 103 points. Niwot and Air Academy finished a more distant fourth and fifth.

Individually, Sprout's patience early paid off with a 15:42 winning time. Dykema would retain his second-place position to the end--ending with a 15:56. Cal Banta, James Lee, and Ryan Matson would round out the remainder of the sub-16 finishers for 4A Boys.