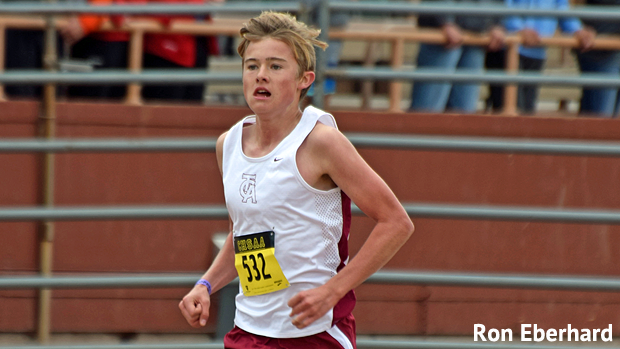 Once inside the stadium, Mason Norman made certain he made his lead stick to the finish line.

It had been few years since The Classical Academy won a state cross country title. A bit longer since the boys had.

The drought met its end on Saturday.

The race started out as a free-for-all at the front. It was well beyond the mile before the race had a discernible leader. Longer still until anyone had any kind of meaningful lead.

Leadership by committee was the rule of the race as a cluster of top contenders, including Blake Davis of Lamar, Tyler Scholl of SkyView Academy, Levi Chambers of Frontier Academy, Ryan Lehmuth of Jefferson Academy, Andrew King of Platte Valley, David Fine of Elizabeth, Colton Stice of Gunnison, and Ryan Moen, Canaan Lamberth, and Mason Norman of The Classical Academy all ventured oh-so-close to the lead but carefully avoided taking any steps clearly in front of any of the others.

Nobody was volunteering to be the sacrificial lamb who thinned out the field only to be consumed by the very pack that benefited from someone taking the pace up a notch.

But, when Mason Norman did finally take the lead, a little beyond the half-way point, there would be no bringing Norman back into the fold.

Fine gave determined chase and stayed within striking range almost up to the stadium finish, but he could never summon the speed to execute a pass. Norman's 15:56 beat Fine's 16:02 by six seconds. Davis would finish next, 15 more seconds back.

Heading into the creek crossing, The Classical Academy appeared to be setting up for a finish with two in the top five, but Ryan Moen took a bad step in the creek and slammed into the opposite bank. As tightly packed as the group was at the point in the race, the misstep cost him several places. Moen would end up in 12th.

Momentarily, that may have seemed to fan the flames of the team battle anew, but reinforcements were coming on Moen's heels. Canaan Lamberth finish in 16th, Nathan Bone in 29th, Brendan Johnston in 35th, and Josiah Cole in 37th.

Second-place SkyView Academy beat The Classical Academy at one of the five scoring positions. SVA's top finisher was Scholl in sixth, followed by Jimmy Scavuzzo in 13th. SVA had managed to close a few points on TCA in the final mile--even apart from Moen's fall--but not nearly enough to eclipse the team scoring advantage TCA held at two miles.