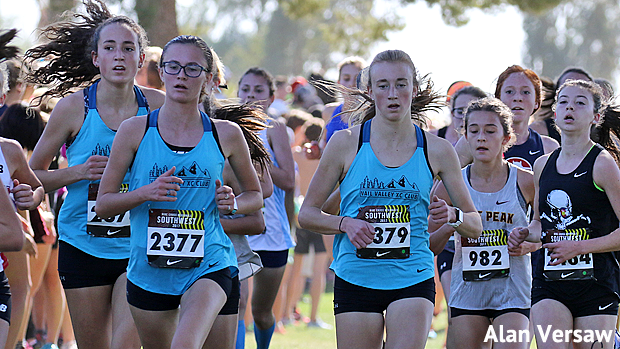 Lizzie Harding, Elizabeth Constien, and Naomi Harding set up strong early. And, they had some important folks in the rear-view mirror.

In recent years, it's been close quarters between Colorado and Utah teams at the top of the girls pile at Nike Cross Southwest.

They broke with that tradition. As deep as the first three places, it was all about Colorado. And no other state was even remotely close this year.

After dominating everything within the borders of Colorado all season long, Mountain Vista discovered that things play by a different set of rules in Arizona.

After spending an extra week at the end of last season wondering if they'd get the invite to Portland, the Broomfield girls--mostly the same set of girls as last year--find themselves in the exact same situation this year.  Third is the hardest place to live with, at least at Nike Cross Regionals. But, third is what Broomfield gets to live with over Thanksgiving break once again this year.

And, the surprising top team this year that doubled as the smallest school in the Championship race? Battle Mountain.

Rob Parish's Huskies set up shop toward the front of the field early and then become bulldogs. They sunk their teeth in and refused to let go. In the end, that netted them the regional title that had been all but written off the Mountain Vista.

Mountain Vista, of course, rolled up in second. They didn't have a bad race, they just didn't have all the answers it took to beat Battle Mountain this time around. But, they still call the second-place team at every Nike Cross Reginonal a national qualifier, so Vista Nation gets another crack at it in two weeks.

The front pack for Battle Mountain was pretty much who it had been all year long. Elizabeth Constien snared 10th in 17:46. Lizzie Harding took 14th in a scalding 17:54. Then Naomi Harding followed in 21st.

So far, so good, but it takes five to wrap it up and tie a bow on it. Alex Raichart's 18:25 was good enough for 52nd, and Grace Johnson closed out the team scoring in 60th. Megan Bamford and Brogan Murray were both under 19:15 for good measure.

That's how a great team rolls.

In terms of individual results, the was a delightful patch of inclusiveness at the top. New Mexico's Amanda Mayoral dropped the field a little better than half-way through. At the end, she still had a lead of four seconds over Arizona's Maya Smith and a winning time of 17:14. Samantha Schadler, also from Arizona, rounded out the top three.

Colorado's Anna Shults, who rolled up a lot of places late in the race, found fourth to her liking. Utah's Sadie Sargent rounded out the fop five, and the list of NXN qualifiers, at 17:19.

Colorado had the next two places in Jenna Fitzsimmons and Quinn McConnell. Fitzsimmons goes on to Portland as part of the Mountain Vista team. McConnell stares down the disappointment of not making it back to Portland after a top-20 finish there last year.

McConnell held a top three position through most of the latter two-thirds of the race but found her legs unresponsive at the very end when she needed on last surge. With Shults and McConnell both posting top-ten finishes, though, Peak to Peak easily exceeded their ranking coming into the race with an eighth-place team finish.