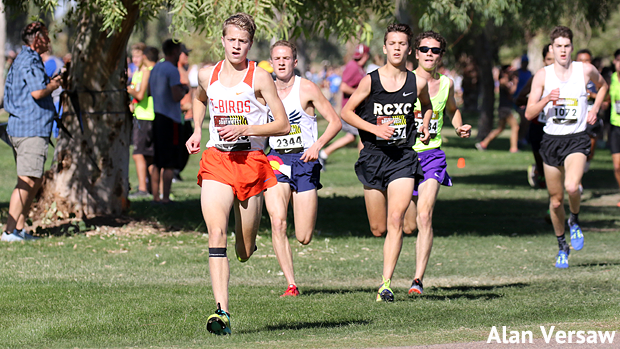 Late in the race, Aidan Troutner took on the look of invincibility, while the team race came to a rolling boil behind him.

Everthing you needed to know about the fifth, fourth, and third place teams was all too evident in their posture as they walked up to the podium. American Fork, Desert Vista, and Timpanogos wanted no part of their lot of being called to the podium at any point before the last two teams to be announced.

The disappointment that the boys from these three teams were dealing with was beyond obvious. A season of dreams came crashing down the moment they knew they would not be getting one of the two automatic qualifying berths for the Southwest region.

For Timpanogos, and to a lesser degree Desert Vista, hope remains for an at-large bid to NXN, but neither Timpanogos nor Desert Vista will know about that for another week. In the meanwhile, that means returning to practice with the entire gamut of mixed emotions. American Fork doesn't even get that.

The bottom line? Five top-tier boys teams in the Southwest region means at least one--and probably more--top team gets left watching NXN from home. As it's been several times before, the Southwest region proved to be a brutal region. A region where hopes come to be vanquished.

If you are good at picking out unfamiliar uniforms, and counting to five for multiple teams at once, in the middle of a frenetic race, you had a pretty good idea from about the midway point forward that Mountain Vista had established a very strong position for themselves. It was much more difficult to say anything about where Timpanogos, Springville, Desert Vista, and American Fork were setting up.

Though the issues of placment were ultimately settled on the course, it wasn't clear to much of anyone what the eventual order of finish had become until the awards ceremony.

I'm told Nike likes it that way. In this case, they got what they wanted. 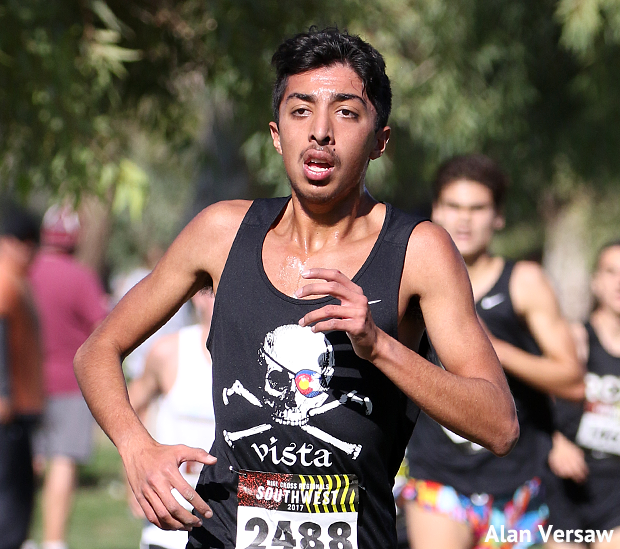 The key to Mountain Vista's tale of triumph was what it so often is in cross country. Mountain Vista got their fifth man across well before any of the other contenders. Shayan Zarrin took his turn leading Vista Nation, crossing in ninth in 15:11. Close behind him were teammates Carter Dillon and Parker Mackay, nailing down places 10 and 14, respectively, and both under 15:20. The team scoring on that went 5-6-9.

That's a very good start, but Springville was also very much in the hunt with a 4th, 13th, and 21st courtesy of Brandon Garnica, Grant Gardner, and Caleb Garnica for a 3-8-16 contribution to the team tally.

Devin Pancake of Springville was next at 36th (27), but Mountain Vista closed the door with Caden Foster and Ethan Rouse in 38th (28) and 43rd (32). Springville wouldn't close out their scoring until 129th place (95). And that afforded Mountain Vista a rather comfortable margin of victory.

Desert Vista might have been able, going in, to lay claim to a stronger season than Timpanogos, but all that is mostly immaterial now. If Desert Vista is to claim an at-large bid, they must--by the rules of the game--follow Timpanogos in to the dance.

There is no hope of an at-large bid opening up space for additional individual qualifiers. So, big names on the season like Harrison Scudamore and Kashon Harrison must go the Foot Locker route if they aim to extend their seasons to a national championship meet.