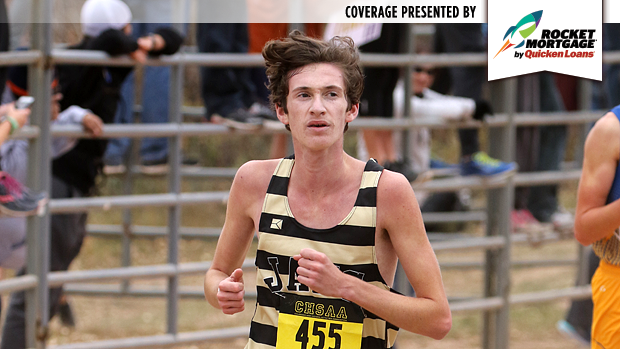 First, tell us what made the decision for the University of Northern Colorado.

I had the opportunity to run at a number of amazing schools, however the University of Northern Colorado stood out to me for a couple of reasons. First and foremost, I would like to become an artist, ideally somebody who works in comics, and realistically a graphic designer, and amazingly (I say that because it seems like few people say "I'd like to draw comics when I grow up") UNCO had an art department that is structured around those things. Secondly, Coach Robbins was one of the nicest, most welcoming people I've ever met, and while he is someone that will push you farther than you think you can go, I think it's important that you have a coach that sees your value as a person above your value as a runner.

What's it like having Coaches Hershelman and Witkowski? Do those guys have a regular serious side or do they more or less keep you in stitches the entire time?

Coach Hershelman and Coach Witkowski are first and foremost absolutely hilarious. I met Coach Hershelman when I was a wee kid running Apex track through CARA, and I noticed almost immediately how funny he was. I originally met Coach Witkowski in middle school on accident, by yelling Hershelman's name at him and getting embarrassed. Now Witkowski occasionally runs with me on weekends, and as such I've gotten to know both quite well. Two more incredible guys have never existed. They are amazing mentors. Their goal, as Hershelman stated often, was to make me into a great person after the whole running thing was over. I'd say I'm going to miss them, but I'll only be in Greeley and I intend to come over for pancakes often. Here's to those two.

Last year, you had Christian Van Cleave to train with. This year, I imagine you had to do most of the quality workouts more or less by yourself. How much of a difference was that for you?

Last year when Christian vamoosed to Cornland, USA, I had this voice in the back of my head saying things like, "How are you gonna run fast in workouts without a rabbit like Christian?" and "What is there in Seward, Nebraska?" But ultimately I found that as long as I stayed focused, completing a workout on my own wasn't as challenging a prospect as I thought it would be. It was definitely a learning experience, but I discovered that I could get myself through an 800 workout at 2-mile effort as long as I stayed out of my own head.

What event or events do you hope to specialize in at UNC?

I'm definitely more of an endurance runner. I think my skillset might lend itself more to the 5 and 10K, but believe it or not, I am wrong sometimes.

Pick a highlight moment for us from your high school career so far.

The highlight of my high school career would definitely be my race at the Thornton Trojan. I had been telling myself all season that I was gonna break 16 on that course, and I put the race together. It was honestly crazy, I came through the 2 mile only a few seconds off my pr and I had so much left in the tank that I decided I'd just run at what felt like mile pace for the rest of the way in. I'm not sure why that was the only race this season that I could put something really impressive together, but regardless it's my favorite one to look back on.

And, do you have any particular goals in mind for the post season or for track in the spring that you're willing to share with us?

My only track goal is redemption. I found out too late that I have a bit of an iron problem, and I've been taking steps to get all that fun stuff back on track. I plan on running around 9:30 in the 2 mile this spring, and hopefully I'll have a season that's more consistent than my last one.