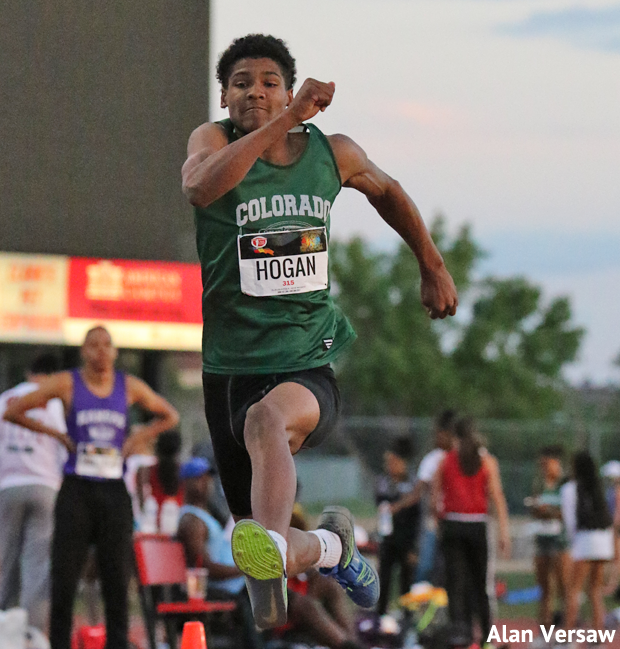 Jequan Hogan provided the first 50-foot triple jump many Colorado fans of track and field had ever seen.

It's been a while since Colorado had a wind-legal 50-foot triple jumper. It would have been a little longer if Jequan Hogan hadn't showed up this spring.

Hogan, of course, is far from a one-dimensional threat at a track meet. In addition to his triple jump, he ranks as one of the state's best in the long jump, high jump, and 110 hurdles. Sometimes, you need a program to know which events he will be in in any given week.

When you have that many irons in the fire, sometimes it's difficult to set your focus. But, evidently, Hogan was able to focus adequately enough for the triple jump in 2017.

After a sophomore year where his best triple jump topped out at a little short of 45 feet, it was apparent from the start that Hogan's junior outdoor season was going to be a little different. On the first weekend of the season, Hogan went 47-2 at the Banana Belt Classic.

Signs of that had been coming in the indoor season, but the proofs came early and often in the outdoor season.

Hogan reached 48-0 at his home meet in mid to late April, but his triple jump marks seemed stuck there, well short of 50, for the next few weeks.

Perhaps it was the extra motivation of a state meet where Fountain-Fort Carson was locked in a battle to the last event with Monarch for the team title. Perhaps is was something else.

In any case, Hogan found a whole new level at the state meet triple jump pit. After fouling his first two attempts, Hogan hit the season's best mark for Colorado with a 49-7.75 on jump 3. One jump later, and when all the sand had been raked back into place, Hogan owned a new PR of 50-7.25, and the only wind-legal 50 foot long jump in Colorado in the new millennium.

Two weeks later, Hogan was back at the pit, proving the state meet jumps were no fluke. At Great Southwest, Hogan hit a wind legal 50-4.75 on his third jump. That made it two 50-footers in a spectacular season.

Triple jump, however, wasn't the only point of excellence for Hogan. The Fountain-Ft. Carson junior also posted the state's top high jump mark of the season at 6-10.75.