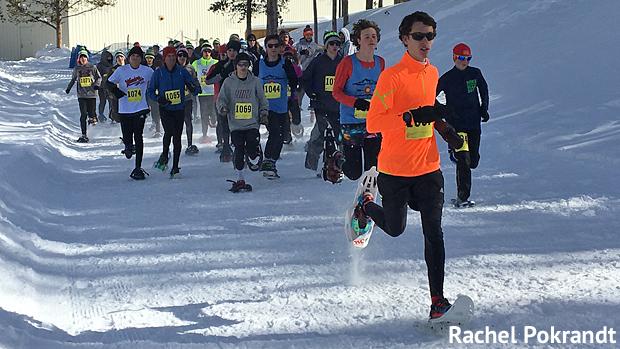 Jared Leblow got out to an early lead as last year's Colorado State Snowshoe Championships and never had need of looking back.

An email recently received from Darren Brungardt informs me that the high school state snowshoe championships are set for Saturday, February 10, in Leadville.

Perhaps there will be measurable snow by then. Or maybe the Leadville course has access to snow-making equipment? Regardless, the race will go on. There were one or two sparse snow years in Frisco as well...

One thing we can be certain of is that there will be new individual champions this year. Both Taryn Ceglowski and Jared Leblow have graduated and are thereby ineligible to defend their titles. That leaves some possibilities open for enterprising souls. Jared's younger brother, Jordan Leblow, is still in middle school and not yet eligible to compete for the high school crown, though he had a nice showing last year.

Central (Grand Junction) and Poudre were last year's team title winners. No word yet on the strength of delegations these programs will be bringing to this year's fray.

Your entry fee is a scant $10. If you're an adult and want to race on the same day, you can get a bib for $20 and race to your own heart's content. Race distances include 5K, 10K, and a variety of sprint races. The high school championship race is a 5K.

Note well, though, that a 5K on snow and at 10,200 feet of elevation bears little resemblance to the feel of a 5K on terra firma in metro Denver. This race definitely takes you up a notch or two in terms of level of challenge.

I'll get the event up on the Colorado Track XC calendar in the next few days, but it the meanwhile you can check out: