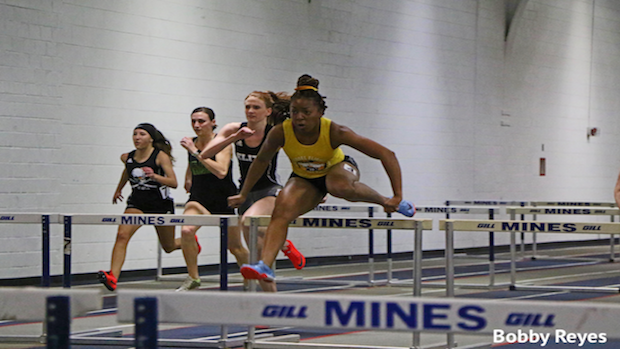 Jaiden Paris dominated the 60 hurdles, running away with the win in 8.82.

Christmas lights are still lining the streets in Golden, and while an unusual warmth blanketed the Front Range Thursday night, the third installation of the Mines Indoor Track and Field High School series took place in Steinhauer Field House at the Colorado School of Mines.
With two hairpin turns for each 189 meters, the meet was stacked with stellar fields in the sprint and the field events, basically, any event that didn't require too many left turns.

The pole vault rapidly became the highlight of the meet, as Mia Manson and Max Manson made it a Manson sweep of the event.

Mia reset her own state best mark, hurdling herself to 12-7, besting her previous mark by two-and-a-half inches and moving her to the No. 15 mark in the country. The 2017 state champ led a wave of competitors over the 11-feet, as Abigail Gray, Hannah Preissler, and Avery Vieregger all went over the mark. Gray was second in 11-7, while Preissler and Vieregger both tallied marks of 11-1.

Like Mia, Max claimed the boys event by resetting his own state best mark. Max had the vault of his life, setting a new personal best of 16-1 -- elevating him to No. 7 in the country. Clearly, last year's runner-up finish at the state meet is in his mind this season. Manson's finish elevated the bar, literally, bringing along Justin Sandberg and Connor Quinlan, who tied for second with a mark of 14-7.
Outside of the pole vault, a laundry list of state-leading marks, or near-misses, were the talk of the night.
Mason Anthony just missed out on claiming the No. 1 mark in the state in the long jump. Anthony went 21-8 for the win. The mark moves him up to the No. 3 spot.
Reece Davidson did, however, tally a state-leading performance in the shot put. The senior tossed 51-09 for an impressive five-foot victory.
Raina Branch came agonizingly close to claiming the No. 1 mark in the high jump. Branch jumped 5-08, just three-fourths of an inch behind Anna Hall. In the girls shot Brittany Line dominated all-comers with a toss of 37-03, the No. 1 mark in the state.

Emily Sloan (center) continued her winning ways, claiming the win in the 60.
Sprints Go According To Plan
Emily Sloan decided to take a week off from hurdling, opting to run the 60 instead. Without any hurdles in her way, Sloan crossed the line first just over a second faster than with hurdles, running 7.65. Not far behind was Maya Evans, who crossed in 7.71.
With Sloan not on the starting line for the 60 hurdles, her absence paved the way for Jaiden Paris to take the win. While the time was about .2 off her result here a month ago, Paris was smooth over the hurdles for an easy victory.
For the boys, Zaire Jackson was the victor in the 60 hurdles, taking a slim win in 8.29. Joel Nyatusah was quick on his heels in 8.33, good for second.
Sterling Brassfield is proving consistency is key, as he went 7.08 in the 60, marking the third time he's run between 7.06, and 7.08 this month.
An impressive feat, given the tight turns, came in the boys 400, where Andrew Timmons blitzed the field with a 53.91. Surely, his feet must have been burning after that. Additionally, Timmons used a scorching kick to win the 800 in 2:05.05 over Dillon Andrews, who ran 2:05.10.
On the girls side of the distance events, Payton Corah kicked hard for a narrow victory in the 800. Corah won in 2:27.57, just ahead of Maggie Smith, who crossed two-tenths of a second later in 2:27.77. In the mile the race belonged to Riley Geldean, who claimed a six-second victory in 5:46.
Meet Results
Tweets by ColoradoTrackXC