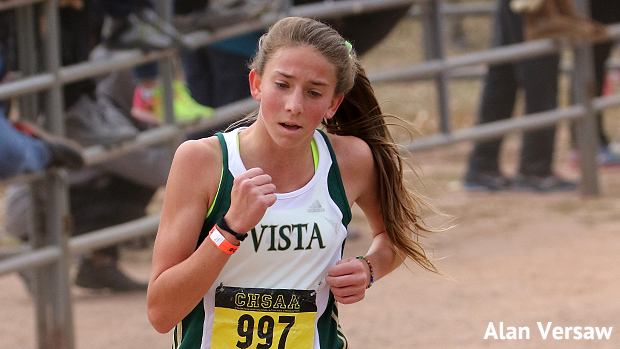 Jenna Fitzsimmons' outstanding season has now been officially recognized by Gatorade, who just named her as the Colorado girls cross country runner of the year.

The 5-foot-2 sophomore raced to the Class 5A state championship this past season with a time of 18:10.3, leading the Golden Eagles to the state title as a team. Fitzsimmons also won the Pat Patten Invitational, the Region 5 championships and the Continental League championships. She also placed sixth at the Nike Cross Nationals Southwest Regional championships and finished 30th nationally at the NXN Final.

A devoted member of Girl Scouts of the USA, Fitzsimmons has volunteered locally assisting special needs children. "Jenna works extremely hard and is one of the most coachable athletes to come through our program," said Mountain Vista coach Eric Selle. "She's very humble and always puts the team goals ahead of any individual goals she may have."

Fitzsimmons has maintained a 4.0 GPA in the classroom. She will begin her junior year of high school this fall.

As a Gatorade Player of the Year, Fitzsimmons will be able to select a national or local youth sports organization to receive a grant as part of the Gatorade Play It Forward program. Every Gatorade Player of the Year state winner receives a $1,000 grant to donate and will have the opportunity to enter for an additional $10,000 spotlight grant by writing a brief essay explaining why their selected organization deserves additional support. 12 spotlight grants - one for each sport - will be announced throughout the year.