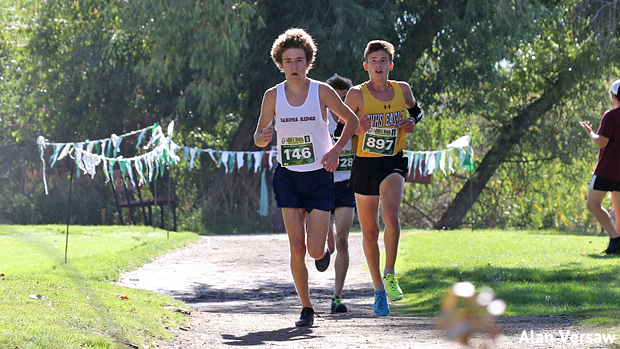 Let's be candid. Everyone expected Dakota Ridge to win this thing in dominating fashion. And the Eagles did nothing to disappoint.

So, there's a sense in which you want to say (in all sincerity), "Move along, nothing to see here."

But, there is something to see here. And the guys in purple made certain you could see it by running in a large glob pretty much the entire five kilometers.

Meet Salida, the new force in 3A boys cross country. Even without Camden Gillis (who may have been off somewhere pedaling a bicyle up a hill, taking the ACT, or perhaps both--I'm not certain of his whereabouts today, just that he wasn't at the Cattails Golf Course in Alamosa), Salida claimed places 11, 12, 13, 14, and 16, all somewhere between 17:24 and 17:33. When you do something like that, you deserve to see your names in bold on Colorado Track XC.

So, let's recognize the collective efforts of Bean Minor, Frank Decew, Sam Kearley, Wyatt Shomion, and Jason Joslin. I can only say I would have appreciated it more if I were not an opposing 3A coach. There is definitely a new menace on the 3A block.

Dakota Ridge won, of course, with 35 points to Salida's 66. Alamosa and The Classical Academy took third and fourth, making this something of a 3A showcase. For good measure, Woodland Park and Bayfield nailed down top ten team finishes as well.

Individually, it was a battle of attrition. And, it didn't take all that long for Connor Ohlson, Dylan Schubert, and Austin Vancil to shed the rest of the lead pack. The three ran together through the middle part of the race before Ohlson fell off the back of the group.

That left Schubert and Vancil, but Schubert was having difficults of his own keeping pace with Vancil's blistering cadence. Over the last half mile or so, there were no reasons to believe anyone but Vancil was going to win this thing.

When he crossed at 15:43, Vancil had 18 seconds of margin on Schubert. Dakota Ridge all but wrapped things up with Ohlson, Riley Abrashoff, and Ben Piegat taking three of the next five places. It was more of a tour de force than a test for the Eagles.