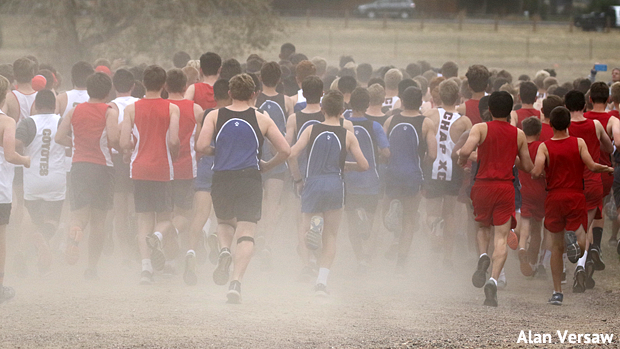 Dust isn't so bad if you don't mind clogged nostrils and dry throats.

As in anyone needed any reminders, it hasn't rained much in Colorado over the last month.

Consequently, being anywhere but in the lead group of runners felt a lot like driving behind a dualie truck on a country road today. As nice as the Polson Ranch course is, it can get a little dusty if the weather has been dry of late.

Even so, the competition proved to be spirited today. A few schools brought only B teams (Heritage and Palmer Ridge chief among those). A couple teams were short a handful of athletes due to the immense gravitational pull of the Desert Twilight. But, for those teams who did show up with full squads, there was plenty to contest today.

I'll cover the two varsity races on pages of their own in just a moment, but it should be noted here that Lakewood's Carley Bennett showed up and ran in the JV Girls race today. I don't know the full story behind that--and it possibly would not be my place to discuss it even if I did--but her time of 19:29 in the JV Girls race would have placed her fourth in the varsity race. It wasn't her fastest time of the season, but it's a relatively short list of competitors from today who did post their fastest times of the season.