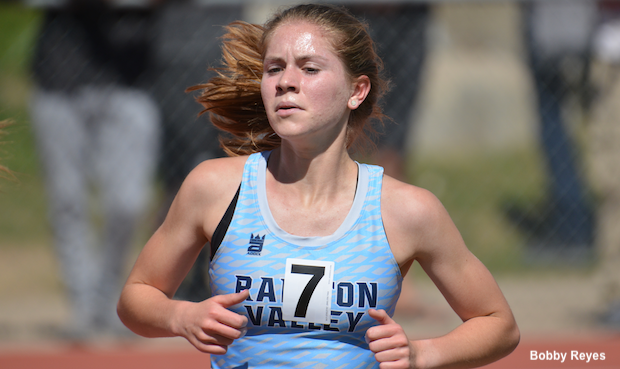 [The Dark Horse is a series I'll be running over the next two weeks. While we know the big name favorites, this series will take a look a little deeper into each class, shining a big spotlight on some of the names who have been lurking in the shadows in previous years, and could likely rise to the ranks of Colorado's elite this fall.]

Like the girl's 4A field, much of the 5A field returns, which means we could see much of the same, or... Or we'll see some movers and shakers among the field. Among those returning include state champions, state runner-ups, runners with national experience, whether that be Nike Cross Nationals, or Footlocker.

It's a high quality and quantity field, with a load of experience running fast and/or winning big races.

The (incoming) senior finished just outside the Top 10 at State last year, crossing in 11th in 18:59. She cracked 19 five of seven times, though, she made a trend running her best last - literally.

Three weeks after State she went on to finish 76th at Nike Cross Regionals, running a personal best of 18:34.

And clearly, she was just getting warmed up.

This reads like she's is on the move, upwards.

Broomfield's Sydney Swanker is one of a few returners who have cracked the magical 18 minute barrier in Colorado - that feat alone puts her in rare company. Her 17:57 victory at Pat Amato is more than a subtle hint as to what she's capable of.

A year ago she finished eighth in the loaded 5A field at State, running 18:50. While nearly everyone returns minus one, Swanker appears ready to take that next step. Aidyn Woodall was the third-fastest freshman at the state meet last year, which says a lot, because Colorado was loaded with the best freshmen in the state - and the country. She finished seventh at the Big Dance last year, running 18:49.

Woodall cracked 19 five times, including a PR of 18:24 at Nike Cross Regionals.

Woodall's MileSplit account is brief - it doesn't include any time on the track. But what we can objectively see, is that she clearly is comfortable on the cross country course, and her performances last year, particularly the state meet, deserve a look.