Sydney Thorvaldson from Rawlins High in Wyoming was the runaway winner. The senior dominated the stacked field with a stellar 16:40 finish - that's the second fastest time run in the country. So, repeat the lines with me again, it was run at 5,466 feet of elevation. The result broke Brie Oakley's 16:43 course record.

Leading the way for Colorado was 2018 Nike Cross Nationals and Footlocker National qualifier Riley Stewart, who not only took the runner-up spot, but she ran a PR of 17:13 - beating her previous best of 17:18 from NXR. Additionally, the time was her first Sub-18 clocking in Colorado. 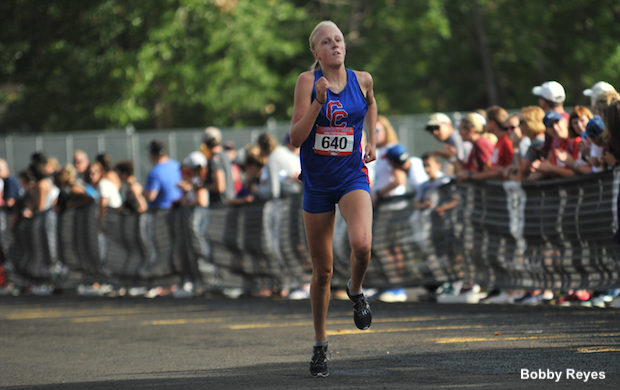 Cherokee Trail's Cameron McConnell was just 12 seconds back in 17:24, which was just off her PR of 17:17 from Desert Twilight. Samantha Blair took the fourth spot, running 17:33 while Cherokee Trail's Mckenna Mazeski got to lay claim as the top freshman in the race, and currently in the state with a fifth place finish, running 17:38.

Taylor Whitfield took the sixth spot in 17:46, just ahead of freshmen teammate Brooke Wilson, who finished one spot back in 17:48.

Stewart and McConnell's 2-3 finish would hint at what we would see in the team race, as Cherry Creek took the title over Cherokee Trail in a hotly contested team battle between two of the best teams in the state, and the Southwest region.

Cherry Creek took this one 78 to 97, while Arapahoe in finished third with 121 points. Niwot finished fourth with 158 points, while Valor Christian was fifth with 181, though it's worth noting that both squads had runners in the Sweepstakes B race since they can't run varsity until after the season.