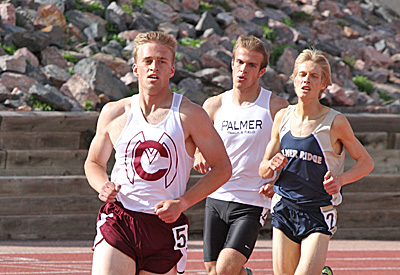 28 teams and a few more individual entries from other teams assembled Friday for the Coronado Cougar Classic. And we all knew what the weather forecast held--25 to 30 mph winds with gusts approaching 50. And those winds were the meets biggest no-show.

For most of the meet, the wind was a complete non-factor. And a lot of fine performances dodged the wind bullet. And, although the Coronado Cougar Classic is officially dwarfed by the Liberty Bell Invitational on the same weekend, you'd never have known it by many of the performances.

There were no performances finer that those turned in a the girls' discus ring. Demonstrating yet again that great performances come in clusters, Kiah Hicks, Krystel Martinez, and Alexis Cooks put on a show for the ages. The trio finished 1-2-3 with best throws of 156-3, 147-10, and 146-6, respectively. I'll save you the trip to the rankings board--Hicks, Martinez, and Cooks now sit at 1-2-3 in the all-classification discus rankings for this season. Martinez had a slightly better throw a week ago, but the marks for Hicks and Cooks are season best marks. And, for the record, the discus toss by Kiah Hicks breaks the 4A all-time mark set by Martinez just last week.

The big event of the evening was supposed to be the elite 1600s, but they got upstaged a little by the discus. A little, not a lot.

The girls race turned out to be something of an Academy District 20 championship race. Heather Bates of Discovery Canyon took the early lead, taking the field through the half in 2:30. At that point, however, the race turned very tactical with nobody wanting to take the lead on lap three. In fact, the third lap added nearly 90 seconds to the clock. On lap four, the three Liberty entries, Shelby Stableford, and Laura Yarrow went for broke. Liberty's Gina Hauptman broke free with about 200 meters to go and won the race in 5:06.62. Teammate Hannah Dimmick was second in 5:08.89. Hannah Everson edged Stableford for third, 5:10.25 to 5:10.34. Yarrow was close on their heels at 5:10.77, with Bates finishing in sixth.

The boys' 1600 played out according to more conventional standards--if you consider a sub-60 opening lap conventional. That lap belonged to Mike Cernoia, who seemed determined to burn out the competition early. For a while, it looked as if his plan would succeed. Andrew Goodman, Spencer Wenck, and Jake Fox tried to maintain a more conservative pace while simultaneously keeping themselves close enough to make an attack if the opportunity ever presented itself.

Late in lap three, it was apparent that the opportunity was arriving if anyone had legs enough left to seize it; Cernoia's form was breaking down. And Cheyenne Mountain's Jake Fox, in particular, seemed to have some spring remaining in his step after the blistering first lap. Fox overhauled the early leader on lap four and maintained his pace all the way through the finish, winning easily in 4:21.11. Cernoia finished nearly four full seconds back.

And that race would seem to have a few implications for both the 4A boys 1600 and team title in three weeks. Cernoia started the season ablaze but has struggled some of late. The guy who looked like the prohibitive favorite to win the 1600 is not as dominant any longer. If Cheyenne Mountain can seize the state 1600 title, that would provide an enormous boost to their team title hopes. Palmer Ridge and Spencer Wenck have to hope that better days than this lay ahead.

The Hunter Warwick part of the equation for Palmer Ridge looked very smooth on Friday, with the hurdler easily taking both hurdle titles, winning in 14.84 (-0.7) and 39.52.

Megan Patterson seems stuck at just short of 46 feet in the shot put. For the second week in a row, she won the event less than an inch short of 46. For the record, Megan Patterson now owns the 3A and 4A all-time best girls' shot put mark. And, TCA's Alexa Chacon moved the 3A 300 hurdle standard down to 46.23 on the season.

Team titles went to the Doherty girls and the Widefield boys. Doherty's girls continue to work on their relay presence. Jordan Rand won the long jump for the Spartans but was perhaps most visible as a part of a couple of sprint relays for the Spartans. Their 49.81 4x100 mark doesn't put them in the 5A driver's seat, but it was enough to indicate they're officially in the sweepstakes.