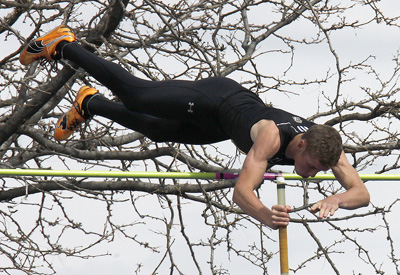 Pole vaulter Josh Holland is just one of the reasons that Arapahoe figures to finish the state meet with an industrial strength point tally. Photo by Jeff McCoy.

Note: As today is the last day of April, it looks as if my plan to do one of these articles for each classification and gender was a little too ambitious. I'll continue to look ahead toward state as time permits but it will no longer be gazing into April's crystal ball.

Arapahoe - Arapahoe does bring a balanced team to the table. The Warriors are maybe just a shade thin in field events, but are capable of producing enough points in other areas that it may turn out than nobody notices. What Arapahoe does boast in the field events is pole vaulter Josh Holland. With a season-best mark of 14-0, Holland figures to be adding some points to the Warriors total in three weeks. Some other easily recognized names dot the roster. Alex Jordan in the hurdles and Connor Winter in the distance events are the most prominent of those names. While Arapahoe may or may not be able to score points in the individual sprint events, they will almost certainly be posting big sprint relay points. Top tier sprint talent may not quite be there, but there is plenty of talent around which to build solid relays. Ditto for the distance group. Arapahoe figures to be one of the last teams standing when the 4x800 medals are given out. Arapahoe could definitely use the benefit of a few "surprise" points at state, but this team is nicely positioned if everything goes according to the trends we've seen thus far this season.

Fort Collins - In a virtual meet, the Lambkins look very good, but we may be seeing a bit of an overrepresentation of Raymond Bozmans in a virtual meet. If I've been watching things as closely as I think I have, Bozmans has done 100, 200, 400, 4x100, 4x200, and 4x400 duty this spring. That means something has to give. I'm guessing the 4x400 is the first to give. Picking between the other events for one to drop becomes a bit more problematic, but my hunch (with zero whispering in my ear from Coach Crist) is that the 400 is next most likely to go. The three days of state are long and arduous for a four-event athlete. Tait Rutherford is having the best season among the Fort Collins distance group, but the 4x800 should be able to field a very representative team as well. Any bonus points from the distance group would be more than welcome. Right now, the prospects for field event points are looking fairly sparse with shot putter Jacob Hanks offering the best hope.

Fountain-Fort Carson - There is an enormous amount of talent on this roster, but it is definitely clustered around the sprints, hurdles, relays, and horizontal jumps. You'd think that would be a broad enough cluster to win it all, but the talent populating these events overlaps a great deal. The individuals with the best reason to hope for scoring points at state are Markesh Woodson (100, 200, possibly 400) and Trey Talley (110 hurdles, long jump, triple jump), Kordale Taylor (long jump, triple jump), and Dakota Leazer (300 hurdles). Solyde Bankston could be an outside hope for individual sprint points along with Quentin Riser in the 400. And, while F-FC can run some mean sprint relays without any of the top guys in the foursome, winning those relays would likely involve taking a couple of these and dedicating some of their events to relays. Coach Montoya has some interesting decisions to make.

Still in the hunt, but out of the inner circle:

Chaparral - Gavin McHenry in the sprints, Brendon Austin in the discus, and Keagan Vargo in the distance events. There don't appear to be enough points between the three to make a serious state title run in a year with teams as strong as the three teams listed above. The Wolverines will have to find some help somewhere and will need to rely on big state meets for each of these three.

Palmer - Before the season started, the hopes seemed to rest on the shoulders of Reggie Allison (horizontal jumps, 100 hurdles), Andrew Goodman (800, 1600, 3200), and Ben Goodman (400). Sprinter Dominic Rufran has added some breadth to the lineup, but in a very strong sprint year, it may not mean any points. Ben Goodman leads the classification in the 400. Andrew Goodman figures to score points in all three distance events, but hasn't quite yet seen his season come together in the way he has to have hoped it would. Allison is looking very good in the triple jump, but is not currently in scoring position in any other events. That leaves the Terrors a little short. They'll spend the next three weeks working on answers, but it's a catch-up race at this point.

Regis Jesuit - Casey Young and JT Van Veen bring with them the potential for a big chunk of state points. It may even be likely that they combine for more than 30 points. If, however, there is state scoring kind of support, it needs to put in an appearance very soon.

ThunderRidge - The Grizzlies are a very good track program. In a dual meet format, they could give plenty of trouble to almost anybody in the state. In an classification-wide state meet, however,  Kiefer Johnson (distance), Frank Graziano (hurdles), and Dalton Vickles (pole vault) seem to end up struggling with the same issues that Palmer and Regis Jesuit face. It's a tough year unless you can find a way to put up significantly more than 40 points at state.