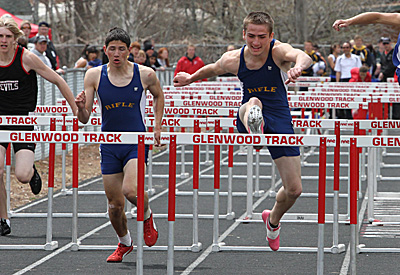 Jose Salazar and Taylor Webb give Rifle a formidable 1-2 punch in both hurdle events. Photo by Alan Versaw.

As exciting as the 3A boys team race is shaping up to be, there should be some spectacular contests in the sprint events. So, I'll deviate a little from my pattern in these articles and discuss a few of the great individual match-ups we are looking forward to.

100 Meters - Alex Mead of Mead represents the Front Range. Taylor Browning of Roaring Fork champions the hopes of the western slope. Who will prevail?

400 Meters - They've been fighting this one out all spring on tracks from Avon to Grand Junction. For the most part, Roaring Fork's Zach Browning has had the best of Rifle's Andrew Proebstle, but they're close enough that anything could happen. And Taylor Browning may end up figuring into this one as well. The 3A all-time and state meet 400 meter record is in serious jeopardy when these guys hit the track with state meet adrenaline.

Shot Put - When you have seven guys going into state at over 47 feet, but no clear leader, you should get an exciting competition. Salida's Clint Myers returns to defend his 2010 title, but this one is anything but a sure thing. Keanan Garnes of Gunnison takes the best throw into this weekend's competition, but it's a fragile lead.

And, honestly, there are many more great event battles shaping up, though these appear to be among the best.

Team-wise, there appear to be about five teams that could win it with a great weekend, and another three or so lurking as dark horses.

Eaton - For those who haven't been paying close attention, Eaton has been steadily improving all season. Key cogs in the Red machine are high jumper/sprinter Gunnar Haynes, sprinter Tony Ball, thrower Eric Kler, middle distance runner Brandon Fritz, long jumper Austin Ekeler, and a couple of very strong sprint relays. One thing Eaton will have to deal with at state is the proximity of the long jump and high jump competitions to the 4x100 finals. Last year, this convergence of events brought out the best in Faith Christian's Hayden Loudenslager, but there's no guarantee it always shakes out that way. Haynes and Ball probably come in with the biggest weight of expectations on their shoulders, but a serious title bid will rise or fall on the ability of the other key pieces to outperform their seeds. If that happens, Eaton could be the big winner.

Faith Christian - Faith Christian was dealt a serious blow before their season even started with Evan Marshall's torn ACL. To the Eagles' credit, however, they've come back and performed very nicely, even with limited numbers on their roster. Those limited numbers mean that Faith needs big contributions from just about everyone. That would include throwers Grayson Bundick and Derek McCartney, hurdler Jacob Macklin, middle distance siblings Sam and Luke Yeager, and longer specialist Evan Fortney. That's not a lot of shoulders across which to spread the load, but that's the situation Faith faces. It appears Faith will get no help from relays this year.

Rifle - By any objective measure, the Bears should go in as favorites. Favorites don't always come out the other side as winners, but Rifle has more ways to hurt you than any other team in the classification. Start with sprinter Andrew Proebstle. He figures to be among the top finishers at both 200 and 400 meters, and figures to take legs on Rifle's 4x200 and 4x400 relays. That's a big load, but Proebstle has been running extremely well this spring. Hurdlers Taylor Webb and Jose Salazar are very capable of adding points in both hurdle events, plus helping out on relays. Taylor Webb is also a threat in the high jump. Long/triple jumper Ryan Moeller is yet another key component for Rifle. He, too figures, to do some relay work. Brandon Kittle gets it done in the pole vault. And, if Rifle can bring their big three relays (4x100, 4x200, 4x400) successfully to finals and score well with each, the contest may be over. Adding fuel to the fire, the 4x800 looks to be a scoring team as well. The issue for Rifle, however, may be how thinly they are willing to spread the talent across relays. And that seems to be the big strategic decision that Coach Jerry Shafer must stare down over the next week.

Roaring Fork - Zach and Taylor Browning will likely score more points in the state meet than any other two athletes. But, as strong as the 3A contenders are, their points alone will not propel the Rams to a state title. It doesn't help that the Brownings will compete against each other, thus diluting the number of points they'd be able to score in other circumstances. Roaring Fork needs some help to reach that level. Right now, their only other ranked event is the 4x100. And, if you're suspecting what I am, that would mean four events for the brothers Browning. By Saturday, that's a serious gamble. So, will Roaring Fork roll the dice and go all-out for the team title or will they try to cut back the load for Zach and Taylor Browning.

The Classical Academy - TCA is the two-time defending state champions. And, while they are a serious contender this year, they don't figure to be scoring points in as many events as last year. Distance has produced a lot of points in the past for the Titans and will have to do that this year for TCA to have a chance at the title. The 4x800 comes in with the top time. Josh Simkins leads the rankings in the 1600 and 3200. The Titans have several possibilities in the 800 but none ranked in the area of big points at this time. Adam Avischious has quietly found his way into the 1600 rankings, but gaining ground on the type of people currently ahead of him will be no small task. Joshua George is positioned to be in the 3200 points. TCA also takes the top-ranked 4x400 going into league meet weekend. The trouble is, prospects aren't as good for the rest of the sprints. The 4x100 and 4x200 could be on the edge of scoring points, but at this point, no individuals would advance to finals if prelims go according to rankings. But it certainly helps the cause of Eric Wermuth (200) and Clark Mourning (400) do make it to finals. Collin Scheer is among the classification's best jumpers and will need to produce well at state for the Titans to have a chance. Trevor Bresson could help the TCA cause if he's able to move up a slot or two from his current position in the 300 hurdles.

Beyond these five, the other schools with enough strength to be power brokers should everything go just right include University, Gunnison, and Middle Park.

Gunnison - The Cowboys have a presence in several events. Bryce Johnston is enjoying a solid season in middle distance. Keanan Garnes is clearly among the classification's top throwers. Stefan Whiting is a ranked 300 hurdler. If Gunnison is to make noise, the relays seem the path to improve their standing. At this point, however, only the 4x800 has posted the kind of performances that would indicate 5, 6, or 7 points is a real possibility.

Middle Park - With Sam Little on your roster, you have to figure you're going to score points. You hope that includes 20 points in the hurdle events. The 4x200 relay has been competitive with Little running. Kellen Lutz currently ranks #2 in the 3A pole vault. Beyond that, however, it's going to take some big surprises to thrust the Panthers into serious contention.

University - The Bulldogs must rely heavily on 400s and 800s--and especially in the form of the 4x400 and 4x800. Garrett Coles is a solid runner at longer distances, but times seem to have plateaued a little for him of late. If he moves up in the 1600 and 3200, it's a big deal for the Bulldog's hopes. A big state meet from Dan Eberhard would immensely aid the prospects for University. Ditto David Krier and Connor Neville in the pole vault.