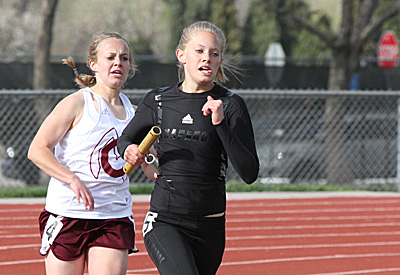 When you're about five miles from Littleton HS, it can be tough to get the 4x400 recognition you deserve, but Arapahoe figures to contend this weekend. Photo by Alan Versaw.

Just as we did with boys, let's take a classification-by-classification view of the events that promise to thrill this weekend...

It took Birdie Hutton a while to make her presence felt on the scene, but now that she's doing her distance thing again, the 1A 1600 looks like a promising event on Saturday. It should come down to Hutton and Bethune's Melanie Burton. For Burton, it figures to be her last high school track and field event and, unless I miss my guess, that means there's a little extra motivation on the line.

In the 1A high jump, it's the old guard versus the new. Freshman Morgan Howard of Cheyenne Wells will try to defend her classification season-best mark of 5-3.5 against senior Nicole Carpenter of Peetz.

The 400 could have important team state title implications. If Akron's Sydney Clarkson wins this one, it will go a long way to offset some points Lyons is sure to pile up. But, Cripple Creek-Victor's Sydni Riley isn't likely to go down quietly.

There is an outstanding battle shaping up in the 300 hurdles. The top four come from two different teams--Limon and Telluride. If Telluride is to make a serious title bid, this is one event they need to go there way. Trying to make that happen will be Emy Ludwing and Lindsey Stindt. Limon counters with Caitlyn Hubbard and Keturah Tatum.

Lyons and Akron are both big on relays, but there appears to be only one really good relay match-up brewing between the two. That would be the 4x200. Akron goes in as the favorite and likely becomes a prohibitive favorite if Lyons used Rachel Hinker to qualify this relay and then pulls her off for other events at state. Another telling match-up between the two schools comes in the pole vault where Corbette Tschanz and Sidney Merrill figure to be vying for top honors.

Sierra Geroux of Custer County and Kathryn Doll of Meeker has all the trappings of an exciting showdown in the triple jump.

You want great match-ups? They're all over the place in 3A girls.

Start with the long jump on Saturday where Tiffany Kenney, Courtney Mills, and Gabby Pajak have a big jump-off. As an off-hand observation, Pajak is probably better than her press to date would indicate. Conditions haven't exactly been the greatest this spring for Pagosa's meets, yet Pajak is still well out beyond 17 feet.

Tiffany Kenney comes around for another big showdown in the high jump, only this time she is paired with Quincey Pedersen of Middle Park. We could be nudging into classification state meet record territory if both jumpers are on.

We got a sneak preview of the 4x200 relay last weekend. Berthoud and Eaton are both within hair of both each other and the state meet record. In a team race that figures to be very tight, this one will be important.

The 3A 1600 also brings together essentially all of the biggest names in 3A girls distance--Sam Berggren, Sydney Harris, Shelby Stableford, Brandi Krieg, and Natalie Anderson. Somebody had better be prepared to bleed to win this one.

And I like the thought of Icenia Anderson lining up next to Sierra Williams at the start line of the 100 meter finals.

Throws are where it's at, baby. Megan Patterson may be unstoppable in the shot put, but the discus will get very, very interesting between Valerie Allman, Krystel Martinez, Kiah Hicks, and Patterson. Allman's throws haven't quite reached as far as the other three's have during the season, but she hasn't thrown against the others yet this season. There seems to be a little synergy that takes place when great throwers come together.

Valor vs. Mullen might be an interesting grudge match in the 4x100. Valor has rather publicly set it's sites on Mullen, and Mullen doesn't figure to want to let this one go. A lot of emotions should be on the line for this one.

Sydney Scott versus Allie Parks in the 3200 should be another great one. Scott has matured a lot as a distance runner in the last year. Parks is having her best track season ever. It should be fun.

If you like speed, the 200 looks like the most intriguing sprint showdown. It will have the advantage of coming on Friday. By Saturday, some of these sprinters may be a little worn down and just a hair off their best race. But, on Friday, Kadeshia Rose, MaryBeth Sant, and Christine Scott should be lined up to thrill from 200 meters out.

I confess that I haven't followed large school girls sprints as closely as some other things over the last few years, but I think it's pretty exceptional to have three sub-25 girls lined up in any 200-meter race in Colorado. That should happen in the 5A girls 200. Dior Hall, Ana Holland, and Chyna Ries. Be there. If Zainab Sanni has a little extra adrenaline on Friday, she just might be right there with the others.

The 400 match-up is a local rivalry played out on a larger stage. Littleton and Arapahoe love to beat each other. And it figures most likely to come down to Kaela Edwards and Taryn Phipps (and, if you're wondering, Edwards is also slated to run the 800 at state).

The 300 hurdles? Wow! Kaylee Packham and Amoni Ashby could both threaten 43-flat with state kind of adrenaline. At least two more may have the wheels to dip under 44.

If they have enough gas left in the tank to light up one more race, the convergence of Littleton, Loveland, and Arapahoe in the 4x400 finals should be worth the price of Saturday's admission all by itself.

The recent emergence of Poudre's Carly Paul as a high jumper makes that event anything but the sure thing it looked like for Kelsey English early in the season. Both a great high jumpers and this one represents a passing of the guard. English is a senior; Paul is a freshman.

Elle Brunsdale, Jordan Rand, and Chyna Ries should make for a dandy of a long jump contest. Figure it takes something over 19 feet to win it.

And, finally, Elisa Isakson and Valentina Pauna are the state's two best pole vaulters this spring. They get to settle it all on the state stage.

Don't let the threat of a little rain keep you away from all this!