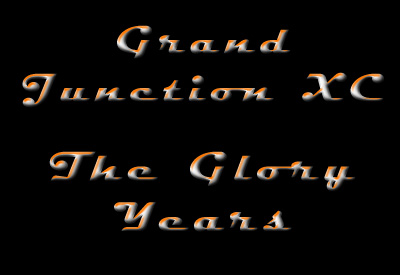 When the tide is out, it's often difficult to remember what things were like at high tide.

It didn't used to be that way.

In the late 80s and early 90s, Grand Junction was a certified cross country powerhouse. The boys were a regular state qualifier, with a high-water mark achieved in 1989 when they finished second to Fort Collins.

During the same period of time, the girls were the scourge of the state. It's safe to say that, during the ten-year span from 1985 through 1994, Grand Junction was as good as any team in the state. In fact, it's reasonable to suggest they were the state's premier girls' program.

Over the span of those 10 years, the Grand Junction girls never missed qualifying for state and finished, in order, fourth, first, second, first, seventh, first, third, fourth, third, and eighth. All of that was accomplished in either the state's largest or second largest classification, depending on the year.

And there would have been another state championship in that run except for a most unfortunate turn of events. That, however, is a story for later in the article.

Fresh out of Ball State University in Indiana, Ned Pollert landed a teaching job in Grand Junction in 1978. Pollert had run cross country and track in high school, but his best days as an athlete were behind him. Running was now a matter of personal fitness and pleasure, and an occasional opportunity to show up in a local road race.

In 1981, Pollert made an in-district transfer to Grand Junction High School. One year later, there was an opening for a head cross country and assistant track coach. Pollert applied and, at age 26 with zero previous coaching experience, he took the helm of the Grand Junction distance program.

Despite some early success (the boys qualified for state and finished eighth in his first season), progress was not necessarily easy. The boys returned to state again in 1984, but the girls would not qualify for state until Pollert's fourth season in 1985. Not entirely coincidentally, either 1984 or 1985 was the first year that Grand Junction High School competed with a freshman class.

There was another obstacle hindering early success. That obstacle lay about a four-hour drive south of Grand Junction in a community known as Durango. Then, as now, Durango was an active, outdoorsy kind of community--the kind of place where a cross country program should thrive. If you know anything about the history of high school cross country in Colorado, you know things were thriving in Durango in the 80s.

Pollert reflects on the early years of his coaching tenure at Grand Junction, "When I first got the job, all I heard about was the Durango dynasty, and how many league championships they had won. Ron Keller and his Durango teams became our gauge... My first focus was that if we can compete with Durango for the league title , then we can compete with anyone... For years I subscribed to the Durango Herald just to keep track of Ron’s teams."

During those years, the western slope was a prominent player in the state cross country meets. Not only Grand Junction and Durango, but Montrose, Moffat County, and Grand Junction Central were formidable powers for a span of several years.


And, in those days, qualifying for state was out of the various league meets, not out of sometimes gerrymandered regional meets as is done today. The Southwestern League of Grand Junction, GJ Central, Fruita Monument, Durango, Montezuma-Cortez, Montrose, and Moffat County qualified just two teams and a handful of individuals to state. Needless to say, getting to state could be an ordeal.

Ron Salazar, who finished second in state cross country in 1989 and would go on to a highly successful college career at the University of Colorado, remarks, "It was crazy at times. I know we wanted to beat GJ Central and Durango whenever possible, especially in the days of Alex Acetta, Jay Madsen (Durango) and AJ Campbell (GJ Central). We never wanted to lose to them and gave it a little extra when we ran against them. I know individually it was always more fun beating their top runner. Regardless of the level of competition, we respected them as runners and I am sure vice versa."

But, Grand Junction didn't run very many meets on the western slope. Even with the solid programs on the western slope, it was still too difficult to get the desired depth of competition by staying west of the Continental Divide for meets. When Grand Junction hosted its own invitational, it was exceedingly rare to see Front Range teams at the meet, but Provo and Timpview made regular appearances from Utah.

So, more often than not, the Grand Junction Tigers traveled over I-70 to Denver or US-50 to Pueblo for their invitational meets.

"I never worried about the effects this had on the kids. We would usually leave around 8:00 on a Friday morning, stop for a short run and stretch, and have a picnic lunch. We would then travel to the meet site, walk/jog the entire course, then relax, do homework, play frisbee, or whatever until it was time to begin race warm-ups. Unless something unexpected happened we would arrive back in GJ around 11:00 to midnight," Pollert recalls.

On reflection, however, Salazar is a little amazed that they all managed it as well as they did, "Our coaches knew that for us to be the best we had to race against the best... Looking back at it, it was pretty amazing that we were always so successful. Long travel time is never a positive for racing well, especially when it is done in the same day. The fact was that we were trained to not let the outside circumstances change how we raced."

The magic wasn't simply in going over the mountains to race, however. Pollert reveals that the Grand Junction cross country teams came over the mountain with another ploy, "One of our goals for our runners who were not in the top five on our team was to beat everyone else’s number five runner. For kids not in our top seven, their goal was to be good enough to be top seven on anybody else’s team."

Getting the most out of each team member was pretty important when you stop to consider that the Grand Junction teams of this era were not especially large. Typical team size was 12 or 13 girls and 15 to 18 boys.

Some of the magic, of course, was in the workouts--and the fact that the coaches largely ran the workouts with the athletes. Salazar reports, "The training philosophy was miles...miles...miles. We worked hard at running long (8-12 miles) up-tempo long runs combined with long, paced intervals (800's up hills), and resting when we needed to. Our coaches were very in tune with us. They knew how hard to push each one us. Some of us would hit 70+ miles [per week] in the season."

It all added up to a healthy measure of success. But, mixed in with that success were some gut-wrenching disappointments.

Pollert recalls the end of the 1987 season as one of his biggest disappointments, saying of it, "This is the one I try to erase from my memory."

In 1986, Grand Junction's girls had dominated the state meet, finishing 40 points ahead of second-place Green Mountain. Jill Schenkel, already a two-time sixth-place finisher at state, and a few others would be back in 87, so things were looking bright for the budding Tiger dynasty.

Durango, however, had other plans. At the 1987 league meet, Durango toppled Grand Junction by a single point, leaving Grand Junction with a bit of a revenge factor heading into state the following week. Despite Schenkel's second-place finish at state, however, Durango once again edged Grand Junction, this time by a score of 120-121.

The Tigers came back to state, this time in Pueblo, in 1991 aiming for a repeat. If the race had been scored by order of finish, they would have had their repeat. Michelle Rademacher won the individual title for the Tigers that year, and Becca Webel also finished in the medals. The rest of the story, however, concerns the Grand Junction runner who finished the race in fifth.

This athlete had a back condition that kept her in a full back brace much of time. When she would run, her back had a tendency to tighten up, causing severe pain and subsequent loss of running form. She was tightening up with a little over a quarter mile to go on the familiar Elmwood Golf Course circuit.

As Pollert tells the story, "My assistant coach had ran over to her and was trying to get her to take some deep breaths and relax, according to the meet official he was moving along beside her while he was talking to her. He then went to a point on the course about 200 to the finish, and tried to talk to her again about relaxing to the finish. The official DQed her as he deemed that my assistant coach was aiding the runner."

"I filed a protest, which didn't do any good. I explained the situation to the meet director, again not doing any good. It was more frustrating than disappointing. There aren't words that can describe how bad that I felt for those kids."

The DQ of their second runner meant that Grand Junction had to score their sixth finisher. The score ballooned to 172 points, still good enough for third, but 50 points behind Green Mountain in first. But for the disqualification, the Grand Junction girls would have won their fourth state title in a span of six years.

Ron Salazar is now a school adminstrator himself in the Denver metropolitan area. He sums up the feelings of many who participated in the glory years of Grand Junction cross country when he says, "To many of us they [coaches Ned Pollert and Larry Ingram] were mentors, father figures, and friends. We knew they cared about us and not state titles. They wanted to win, but for us to experience the thrill of winning not for themselves... I still talk with them. How many coaches can say that? They were, and still are, an important part of many of our lives."