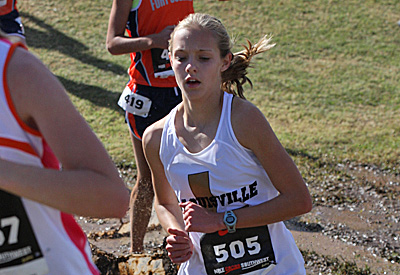 We took a look at the NXN-SW region boys last week. This week is the girls' turn.

Last year, Fort Collins claimed the narrowest of victories over in-state rival Monarch who, in turn, edged out Xavier College Prep of Arizona for the region's second berth into Nike Cross Nationals. All three teams are back this year with relatively the same lineups intact. Just for that reason alone, it should be interesting. But there might be a few more teams climbing into consideration.

As we did with the boys, let's start with New Mexico.

It wasn't a banner year for New Mexico at NXN-SW in 2010. Albuquerque Academy's girls topped the state's entries in 9th, followed by Los Alamos in 13th and Eldorado in 15th.

Making matters more difficult, Albuquerque Academy and Eldorado both took a big hit at their graduation ceremonies this spring. Los Alamos returns a little more intact, losing only one of their top five to graduation. The Hilltoppers faded a little at NXN-SW, but had what was probably the strongest conclusion to their state-sanctioned season of any New Mexico girls team.

While none of the state's individuals appear capable of filling Julia Foster's shoes, neither do any of the top New Mexico teams seem to be so devastated by graduation that they can't come back and be as good as last year--or possibly even better.

And, the big three should have company this year in the form of the Cleveland Storm. Significantly, Cleveland brings back their entire state squad from last fall, led by junior Malia Gonzales.

All four of these teams have reasonable depth and NXN-SW experience. While none of the four had the look of a serious NXN contender coming out of track season, one summer of solid work can change a lot of things.

Note: My New Mexico analysis is deeply indebted to Sal Gonzales who, if not the most knowledgeable observer of things pertaining to cross country in New Mexico, is certainly among the most willing to share his insights.

In Arizona, it was all Xavier Prep last fall. Nobody else ever came close. Even Xavier's second team cleaned up when it was their turn.

By any reasonable analysis, Xavier enters this fall as the prohibitive favorites again. Sarah Fakler and Breanna Perrone are back as unquestionably two of the top five in all of Arizona. It doesn't drop off much behind them, either. The rest of the top seven could contribute nicely on anyone else's varsity. What Xavier has to figure out this fall is how to be half as dominant at NXN-SW as they seem to be at every other meet they enter.

Highland is, by any reasonable accounting, the next-best team in Arizona this fall. Kristi Rush and Tory Haberman lead this team and both are very capable. If Highland can close the 2-3 gap and bring 4,5, and 6 along, this team has top-five potential at NXN-SW.

Barring incoming freshmen or transfers who make a huge impact, the only other Arizona team witha measurable presence on the horizon at the moment is Pinnacle.

You can scan last fall's cross country results and this spring's track results without finding a team in Nevada showing the kind of depth necessary to make a run at the schools from the bigger states in the region. With only two major metropolitan areas in the state and one of those two in an area of torrid climate and with proportionally few households with children, there are a lot of factors that work against the development of great cross country programs in the Silver State.

To my partially trained eye, the top girls teams in Nevada this fall appear to be Elko, Palo Verde, and Carson. It will be interesting to see how it all plays out this fall.

We will, of course, keep an eye on developments in Nevada. There is no shame that stings in quite the same way as being surprised by someone you underestimated too long.

Since Nike Cross Regionals began in 2007, Utah has always had strong teams. Although only Davis (2007) has advanced to NXN from NXN-SW, the threat of a Utah qualifier has always been present and real.

It is no less present nor any less real this year. Davis, led by Shea Martinez, and Ogden, a team that seems to get better with each new season (whether track or cross country), are both serious contenders for NXN berths.

Davis lost some individuals to graduation this spring, but a deep program like Davis always has new faces ready to step onto the big stage and perform. Girls soccer is a fall sport in Utah and, thus, some of those who make big contributions on the track in the spring may not be available in the fall. That is one of the dilemmas facing Coach Corbin Talley. Regardless of how that situation resolves itself (or doesn't), figure on Davis having a strong cross presence this fall.

Ogden will enter the season widely regarded as the best team in Utah. Last year, Ogden caught a few people by surprise. That won't happen this fall as the Tigers will carry the burden of expectations with them this fall. Sarah Feeny, Avery Calton, and Jamie Stokes would be three of the big reasons for those expecations. All three were top-20 finishers at NXN-SW last fall. In fact, through three runners, Ogden was the top team at last year's NXN-SW championship race.

Other teams from Utah with some potential to show well at NXN-SW are Skyline, Orem, Park City, and Mountain View. But, Utah doesn't have a long history of sending large numbers of girls teams to Arizona for the regional championship race.

Four of the top six, five of the top eight, and six of the top ten teams at NXN-SW 2010 came from Colorado. The competition within the state was intense last fall and figures to be again this year.

Fort Collins needs no introduction. The Lambkins have won every regional championship to date. With only one graduated off a very deep team from last year, there's no reason to count them as anything other than the favorites this fall. Erin Hooker figures to lead the show again this fall. Last year's bumper crop of freshmen are one year older and wiser this fall. The beat goes on.

Monarch took some hits to graduation, but has the basis of a solid team in the form of Claire Green, Taylor Floming, Kaitlyn Benner, and Rebecca Richmond.

Cherry Creek, which hasn't yet visited Arizona for a post-season race, may be the surprise of the fall in Colorado if rumors about incoming freshmen turn out to be true. In any case, Rebekah Bosler and Olivia Anderson give them a great start on a top five.

The Classical Academy, twice an NXN qualifier, should be a little stronger again after a bit of an off year in 2010. Shelby Stableford leads the Titans.

Liberty took a big hit with the departure of Hannah Dimmick, but Hannah Everson and Gina Hauptman give the Lancers a formidable roster with or without Dimmick.

Highlands Ranch lost Eleanor Fulton but finished 10th at NXN-SW last fall without Fulton. That should be a clue that the Falcons will be back as a contender this fall. Kristen Kientz and Kristiana Oslund run from the front for Highlands Ranch.

Cheyenne Mountain went to Arizona last year and finished eighth. They graduated a couple of scorers but probably will come back as a stronger team this fall even so.

Arapahoe and Boulder didn't show up at NXN-SW last fall. Both may be able to put together the kind of season that would make them a contender this fall should they choose to make the trip.

It will take some solid team efforts to wrest the NXN berths from Colorado's domination once again this fall.