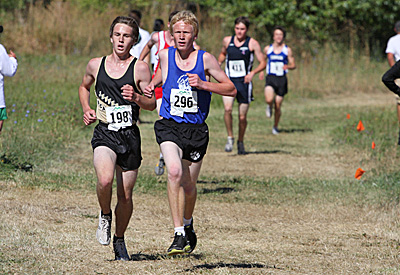 If you've been ignoring Stephen Rice and Peak to Peak, you'll want to stop doing that very soon. Photo by Alan Versaw.

1. Fruita Monument Boys - Sometimes, it pays to look at summer track and field results. In this case, if you've been looking at the results from the age group meets, you'd know what I've learned--Fruita Monument has the beginnings of a very good team in place. Kyler Brown and Chuck Bisbee have been having a very good summer on the oval. If they have enough left in the tank to make the transition to the cross country course, Fruita Monument should be fielding its best cross country team in years. Brown and Bisbee will need to pull some more talent up to their level, and Alex Rico is at the top of the short list to join them, but the Wildcats could surprise a few people this fall. This team should qualify for state and just might be a top 15 kind of team once they get there.

2. Frontier Academy Girls - Next to Hotchkiss, already a known quantity, no team in 3A girls gives me as much cause for concern as Frontier Academy. As a brand, spanking new program last fall, Molly Morrison and company ran to seventh in the state meet. The Wolverines weren't quite as impressive in track this spring, but a very good cross country team can be almost invisible in track and field. That's frustrating for the coach, but true nonetheless. This team reminds me a lot of The Classical Academy teams of about nine years ago.

3. Peak to Peak Boys - The Pumas are not a traditional power among 3A boys. I have a hunch that's about to change. Unfortunately, this one has the potential to help fuel some new speculation that charter schools are up to something untoward. Oh well. Rice, Oveson, the brothers Rodenburg, and the brothers Healy have paid their dues. And guess what? Only Oveson is a senior. Look for this team to make a serious title run this fall. Period.

4. Rangely Boys - Rangely qualified a team for 2A state last fall through the back door. Two of their three runners were seniors and that could be a problem, but my sense of things is that this team is ready to rise to bigger things this fall. Will Scoggins returns as the leader of the team. Frankly, this is a somewhat bleak corner of the state. You can train without a lot of distractions here. If they've been doing that in Rangely this summer, the Panthers should be a 2A team to be reckoned with in the fall.

5. Crested Butte Boys - Rangely did what Crested Butte couldn't do last fall--qualify a "team" of three individuals for the state meet. Crested Butte only got two in. Two freshmen, to be precise. And, Ian Boucher and Forrest Smith had nice track seasons to follow up on their cross country success. Just one more guy to fill the gap and Crested Butte could easily be a top three contender among 2A boys. If they stay the course, they are a potential state championship team in 2012.

6. Coronado Girls - A lot of the cross country crew wasn't part of Coronado track and field this spring. I'm inferring that means they were messing around kicking balls into very large nets or some other such thing. In any case, the Coronado girls are always a team at least knocking on the door of the top level of teams. They have the depth to make it happen this fall if everyone shows up for the team. When you're ticking off the list of 4A contenders, remember to include this team. Sylvia Hayes figures as the leader of the pack.

7. The Vanguard School Girls - The Coursers were young last year, very young. But this is also a team that has learned it can compete. Can they push Nederland? Probably not this fall, but Jessy Sweet and Nicole Daly figure to take the team to the next level this year with many more possibilities in view for 2012.

9. Bear Creek Boys - Honestly, it's difficult to find sleepers in 5A, but Bear Creek just might fit the label. Stefan Lowe is the only member of the team on anyone's radar screen at this point, but the Bears look like the one 5A team without a top-five kind of pedigree that could legitimately slip into that range this fall.

10. SkyView Academy Boys and Girls - This one's a sentimental pick. To my knowledge, they haven't settled on a mascot yet and will likely be CHSAA probationary this fall. This is a brand new high school (though not a brand new school) just off the south side of C-470 in Highlands Ranch. I lost one very good assistant coach to this program, and thus my confidence that this will be a rising program in the 2A ranks. Randy Scherer has wonderful skills with young people and saw first-hand the little things that helped make TCA successful. He probably also took note of a few things that were holding us back along the way. It's now time to implement what he learned. Give this team a year or two and see if something special isn't happening. The team will be all freshmen this fall.