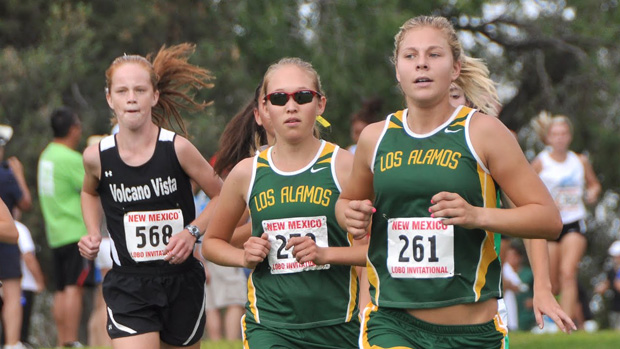 Jen Mooday and Teresa Sandoval create a little space at the front of the race at the UNM Lobo Invitational earlier this season. Photo by Blake Wood.

Although it's way too early to make hard predictions about who will get bids to the NXN-SW championship races, it's not at all too soon to look and see what's happening in the various states that may have implications for who might make it to the big dance.

It was a busy week in some states and a light week in others. This week, we take the alphabetical approach, and that means starting with Arizona.

The big guns sat their big guns this week. That means the Xavier College Prep and Desert Vista teams essentially sat out all of their top girls and boys, respectively. We will, of course, keep an eye on both of these teams as the season progresses and both teams have already laid down statements of considerable weight.

The Desert Vista girls did produce some noteworthy times at the Chandler Invitational. You kind of have to dig through the results, however, to find what you're looking for. The meet is scored by grade level (seniors against seniors, juniors against juniors, and so on), and that makes it easy to hide what a team is capable of when they're all together. In any case, the Desert Vista girls clearly have at least three who are sub-20 type runners. That won't take them to Portland, but it does put them on the radar screen for future notice and with best wishes for continued development.

Mesa Mountain View's girls were absolutely dominant at the Adobe Invitational hosted by Sandra Day O'Connor (High School, that is). The boys were only slightly less dominant. Billie Dytrt is emerging as the front runner for the Mesa Mountain View girls, a fact which should give rise to a fair bit of discussion regarding the proper pronunciation of her last last name.

Also of some note is the fact that Chinle cleaned up at their own invitational, taking down Tuba City in the boys' race and thumping all comers in the girls race. Rolonda Jumbo and Johnny Yazzie won individual titles for the Wildcats.

Elsewhere? A pretty quiet weekend in the Grand Canyon State.

It was anything but a quiet weekend in Colorado. It would seem there are a lot of teams with an interest in going to Phoenix this November.

On Friday evening, it was the venerable Cherry Creek Invitational. And with a coaching change at Cherry Creek HS, there may be some interest in sending a team to Nike Cross Regionals, interest that has not been in place the last four years. In any case, the Cherry Creek girls are clearly the kind of team you'll want to keep an eye on. Jordyn Colter is the new phenom in town, but let's not forget that Olivia Anderson is still one of the best runners in the state. The Bruins don't lack for talent.

But the Bruins didn't win their home meet. That honor went to Monarch. If you thought Monarch was tough last year, get ready for what looks to be an even better team this year. Claire Green has taken her race up a level and the Coyotes are about as deep as you can imagine behind her. Who's #2 for the Coyotes? Well, there appears to be a committee of about four girls. And, they're all good.

Fort Collins was at the meet as well, but the Lambkins are the cause of no small amount of head scratching so far this season. Fortunately, Liberty Bell comes up this weekend and most teams don't find it very easy to play games of try-and-guess-what-we're-up-to-this-week at Colorado's most prestigious invitational. Be officially concerned about the Fort Collins team if things come out flat on Friday. Until then, reserve judgment. For now, the Fort Collins girls finished third at Cherry Creek, behind both Monarch and Cherry Creek, Erin Hooker, their top finisher, was sixth overall.

On the boys' side of things at Cherry Creek, Fort Collins was in complete control, even running without the services of two of their top seven. Word has it that Jefferson Abbey will be back for Liberty Bell (update, 9/15: Abbey is not listed on the Fort Collins entries for Liberty Bell). Monarch was a distant second to the guys in purple.

On Saturday, Cheyenne Mountain previewed their bid for the new state meet location. What we saw coming out of that meet were two very strong Thompson Valley teams. The Eagles boys, led by Gus Waneka, parked four in the top ten on a challenging course and look to be clearly one of the top boys teams in Colorado this fall. The girls, too, dusted their competition, but we need a meet where Thompson Valley goes against some of the state's strongest girls teams to get a good read on just how competitive their girls will be on a regional level.

Up the I-25 corridor a bit, there were two big meets in Boulder County, the St. Vrain and Centaurus Invitationals. The Centaurus Invitational yielded this intriguing bit of information: Fairview has a very good boys team this fall. Like the Thompson Valley girls, we need to see the Knights against some top-tier teams to know just how strong they are, but they have muscled their way onto the regional radar screen. At St. Vrain, the Broomfield boys made a statement on much the same order that the Thompson Valley boys made down in Colorado Springs. We'll get a closer look at how these two teams match up at Liberty Bell on Friday. Mountain Vista finished second among the boys' teams, but is still running short-handed.

Among the girls' teams at St. Vrain, The Classical Academy topped Mountain Vista by 10 points. Both are NXN-SW regulars and should be very much in the mix later this fall. You want to be cautious about much too much of early results, but both teams enjoyed a solid outing. For Mountain Vista, it was their second solid outing of the season after taking down Fort Collins and Arapahoe the week before.

Nick Hartle's Centennial team made their case as the best of Nevada by finishing as the top in-state team in the Las Vegas Invitational. Of some concern for the folks in Nevada, however, is the fact that Centennial was turned back by Page (AZ) in the overall standings. Right now, nobody from Centennial is riding close enough on Hartle's heals to give the team the punch they need in big meets like Las Vegas.

Page also beat all of the Nevada girls teams at Las Vegas. It will be interesting to see how Page fares within Arizona as the season progresses.

The top schools parted ways this week after butting heads at the UNM Lobo Invitational on opening weekend.

The Rio Rancho schools (Rio Rancho and Cleveland) headed down I-25 almost two hours to the Socorro Stampede and busted some chops in the boys race. Cleveland ace Luis Martinez won the three mile affair easily in 15:39, and Cleveland topped their cross-town rivals by a score of 32 - 48. That difference, however, may be bigger than it appears at first glance as the Storm beat the Rams at every scoring position and the two programs provided the bulk of each other's compeition at this meet.

Rio Rancho and Cleveland reversed the order of team finish in the girls race but, to my eyes, it appears that the boys' teams at these schools are probably a bit stronger regional contenders than the girls--at least for now.

Albuquerque Academy swept the team titles at the Highland Invitational, including the first three girls all in under 19:45. It's arguable, however, that the Highland meet wasn't hosting the stiffest competition in the state. We'll keep an eye on how the Chargers fare in bigger meets with higher stakes. Jesus Estrada of Atrisco Heritage won the boys' race in 15:50, but four of the next seven places were wearing Charger red and the meet was more or less over at that point.

Maybe the big deal meet of the weekend in NM was the La Cueva Invitational, though it certainly wasn't the largest meet. Here we got a very nice matchup between the Eldorada and Los Alamos girls. Teo Cutter's crew (Eldorado) won this one by taking four of the top seven and five of the top 11 places. Between Eldorado and Los Alamos, there weren't many medals left for other folks. Widely regarded as the two top girls teams in New Mexico, Eldorado and Los Alamos gave us a good showing of strength in this one. The Hilltoppers won the boys race with comparatively little resistance.

One final note before leaving the Land of Enchantment would be that the St. Pius X girls put the hurt on the field at the Jemez Valley Invitational. These girls belong on the regional radar as well.

I won't go as far as to say the everybody who is somebody in Utah was at one of two meets this past weekend, but it comes pretty close to that.

The two big meets were the Wasatch Invitational in Soldier Hollow and the BYU Autumn Classic in Provo. Apparently autumn begins before the autumnal equinox in Provo (a sort of geographical oddity to file away for trivia contests).

Park City won the girls' race at the Wasatch Invite, but don't quite seem to have the punch they've had in previous years. None of Park City's finishers dipped under 20:00 on what is a reasonably fast course.

What you really need to know about the Wasatch Invitational is that the American Fork boys are back to old tricks, annihilating everyone and taking no prisoners along the way. Clayton Young and Mack Morrison go 1-2 at 15:43 and 15:49. In a fairly large field, the Cavemen beat the second-place team by nearly 100 points.

Had the Cavemen traveled to nearby Provo, they may have met with more resistance in the form of Davis High School. Davis is a team not to be trifled with, as evidenced by the fact that they crammed all of their scoring five into the top eight places (in a race with 114 finishers). Davis and American Fork will meet eventually. Be sure you have tickets for it when they do. Offer to pay even if they aren't selling tickets.

Oh, and by the way, Davis's top five finished the 5K in times ranging from 15:50 to 16:20. That would be a nice example of pack time. If Davis hadn't done so well, we might have noticed sooner than Mountain View also had five finishers under 16:40. Did we mention that Utah is a very tough boys' state?

Ogden got a little opportunity to show what they have in the girls' race at BYU, but it may have been a mixed bag of results for the Tigers. Sarah Feeny and Jamie Stokes were solid in places two and three, but the gap behind them was bigger than we are accustomed to from this team. Although Ogden took second-place Mountain View by a score of 44 - 60, it wasn't as dominating of a performance is we might have expected, though it must be said that all five scorers were under 20:00.

Generally speaking, the BYU course is a fast 5K.