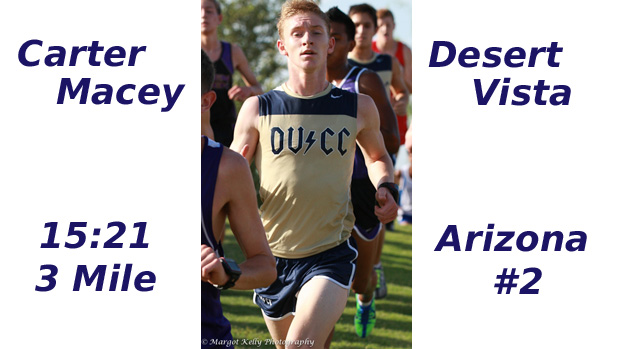 When you start looking at the top talent in Arizona, it's hard to miss Carter Macey and his Desert Vista teammates. And, although they took this last weekend off, they are taking the desert by storm. Photo by Margot Kelly.

It was likely the busiest weekend yet in the Southwest region. And, for the most part, the contenders held their own. We'll take a quick spin through the region and show you how it all worked out.

Unfortunately, there was one major meet of contenders in New Mexico and the only results I have are in a scanned document of the original meet printout. It's a little tough to link to that. So, I'll tell you what happened at the Albuquerque Academy campus on Friday afternoon.

The girls varsity race was definitely a matchup for mid-season bragging rights in the Land of Enchantment. And this one lived up to the billing. Eldorado edged Los Alamos 61 - 64 for the meet title. Jennifer Mooday and Teresa Sandoval set the Hilltoppers up well with a 4-5 finish. And, Los Alamos still held a one-point lead after four runners, but Eldorado took an advantage of four points at the final scoring position with Jessica DePoy going 20:58, just seconds ahead of Miranda Barraza at 21:13. There won't be many better opportunities for these two teams to meet as Eldorado haunts the 5A ranks and Los Alamos the 4A ranks in New Mexico.

Albuquerque Academy finished a moderately distant third. Nobody else was close.

Luis Martinez added another notch to his belt, winning in 15:43, 30 seconds ahead of second. If Martinez keeps adding notches to his belt, he's soon going to need a pair of suspenders.

Despite a 1-4-5 finish for the Cleveland Storm, however, Albuquerque Academy played the depth card and won the meet title by a single point. The Chargers scored 6-10-11-12-18 for a total of 57 to Cleveland's 58. Jordan Farrell, Andy Eras, Ethan Long, and Ryan Lesansee all finished under 17:00 for the Chargers.

Sandia and Los Alamos were a ways back in third and fourth, respectively.

Things were very quiet in Arizona this weekend as teams seem to be looking ahead to this weekend's Desert Twilight Classic.

Mesa Mountain View edged Highland by three points for the boys' title at the Ojo Rojo Lions Invitational. Led by Tory Haberman's 18:40, Highland returned the favor in the girls' race.

Chinle went to Pine Top to clean up at the Shane Morris Inviational, but did so without the services of their top runners. Page went to Bob Firman in Idaho and got treated a little roughly by the assembled top teams. The outcome certainly wasn't what they should have been hoping for.

Xavier College Prep and Desert Vista had their big guns in civvies this weekend.

When things get going in Nevada, the top teams go to California. And, the Stanford Invitational is a nice place to post some fast times.

Nick Hartle (Centennial, 15:17) and Jordan Cardenas (Reno, 15:20) posted the fastest of the fast times, but this analysis is really more about teams.

The Carson girls, behind an 18:20 from April Shonnard, took fourth in the D1 girls race. Reno took fourth in the D2 boys race and Galena seventh in the D3 boys race. Both were decent outcomes that help to establish these teams as potential NXN-SW championship race material. Depth will be a likely concern for all three of these teams as things look forward to NXN-SW. The front runners are plenty strong, but they will need improvement at the later scoring positions.

The biggest action in Utah wasn't in Utah. It was across the border in Boise, Idaho, at a little lower elevation that the Utah schools usually get to run.

The Davis boys went to Bob Firman and had a very good showing, finishing a strong second to Arcadia (CA, remember them?). Davis's Brad Nye finished second overall in the Elite race with a time of 15:50. Orem's boys also had a very respectable finish of sixth in this loaded field.

It was in the girls' race, however, that Utah really shone. In what will seem like an upset to a lot of folks, Skyline took down Ogden in the Elite girls race by a score of 90 - 109. But, if you've been watching the early season results out of Utah, you had to have had a sense this one was coming. Sarah Feeny of Odgen finished third overall and ran very well at 18:22, but Skyline put their entire front four in ahead of Ogden's second. And that was pretty much the end of the story in the team scoring. Now the question emerges, will Skyline make their first-ever trip to Arizona for NXN-SW?

Herriman's boys won the Herriman Invitational, though that should have been expected.

American Fork's boys crushed the competition at the Nebo Invitational, with Clayton Young, Mack Morrison, Brayden McLelland, and Tyson Green going 1-2-3-4. The Cavemen had to wait until the seventh finisher, however, to complete their team scoring. Lehi edged Maple Mountain and Pine View for the girls title.

There still appear to be no boys teams in Utah running in the same time zone as Davis and American Fork. The more things change, the more they stay the same.

Almost all of the main players were in action in Colorado this weekend, with the Monarch girls being the most notable exception. The Lady Coyotes took the week off but should return to action at Friday's Pat Patten Invitational in Boulder.

Fort Collins ran partial varsity squads at their own (John Martin) Invitational and paid for it in the form of ceding both team titles to a very good Thompson Valley squad. Thompson Valley went loaded for bear and brought back a couple of Lambkins. Griffin Hay of Fort Collins and Gus Waneka of Thompson Valley dueled to a dead heat at the finish and had to settle things with an arm-wrestling match. Hay was declared the official winner.

Broomfield's boys coasted through their own invitational, not bothering to take a serious shot at winning the team title. Bigger things lie ahead for the Eagles. With Broomfield being in such a generous mood, Niwot ran away with the boys' team title and Smoky Hill the girls' team title at the Broomfield Invitational.

Mountain Vista simply plundered the opposition at the Rock Canyon Invitational. For the first time all year, the Golden Eagles put together full varsity lineups for both the boys and girls, and it became quickly apparent that the assembled masses had no answers to the guys and girls in white shirts and green shorts.

Cherry Creek's girls went all the way to Nike Pre Nationals and raised a few eyebrows by taking home the second-place hardware.

It's difficult to know exactly what to make of a dominating first-place finish in the team standings in the Blue race at the Rim Rock Classic (4K), but Pine Creek's girls accomplished exactly that. Pine Creek visits the TCA Invitational this weekend to square off against Fort Collins and The Classical Academy, among other top teams. The meaning of that finish at Rim Rock should have a little more clarity after this weekend.

The Classical Academy teams revisited their small school roots at the Salida Invitational. The girls perfect scored the field, but the boys, minus one top runner, struggled their way to a team title.

Fairview's boys and girls dominated at the Aurora Invitational.