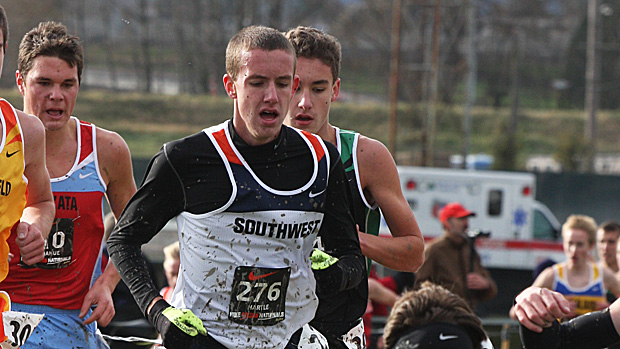 Nevada's Nick Hartle made it to NXN last year and appears to be the Silver State's strongest hope for representation at the national championship again this year. Colorado Track XC file photo.

It was a quiet week around the NXN-SW region. A very quiet week.

To nobody's surprise, American Fork absolutely dominated their Region 4 meet. In a region of six teams, the Cavemen managed a 63-point spread on second place. If that doesn't catch your attention, you're probably lacking experience in scoring six-team meets.

Skyline was almost as convincing in winning their Region 7 meet. Like American Fork, they staked sole claim to the top three individual places (actually, the American Fork boys claimed the top four places in Region 4) in their meet. Herriman posted four of the top five places on the boys' side of Region 7.

Thus far, domination has been a common theme across the Utah regional meets.

Most of the rest of the regional championship action, an especially the action that involves strong NXN-SW candidates, in Utah takes place this week.

Thus far, I've been able to uncover no evidence that any of the top teams in Arizona had their top athletes in action this week. Apparently, the Desert Twilight XC Festival on September 30 was the equivalent of a massive Thanksgiving dinner, tiding the teams over for a long time.

Centennial may be the top boys' team in the state, but the appeared to be idle this past week. Sydney Badger of the Centennial girls won the individual title at the Central Park Invitational in Huntington Beach, California, with a time of 17:38 over the three mile course. Her teammates, however, were well in arrears and Centennial was not a factor in the team scoring. Apparently, the Centennial boys and Centennial girls do not share a common travel schedule.

Up north, Reno took a beating stick to the field in the Reed Invitational in nearby Sparks. Reno's Jordan Cardenas, perhaps the second-best runner in Nevada, took the individual title in 16:18.

Carson and Galena showed up at the Asics Clovis Invitational in California with Galena finishing eighth in the #4 varsity boys race. Carson finished 10th in the #5 varsity girls race. I'd love to be able to tell you what that all means, but I'm a little out of the loop of how varsity race assignments are made at the Clovis Invitational. The team times for both schools on the 5K course (16:54 average for the Galena boys and 19:26 for the Carson girls) were fairly impressive, but the average times were equally (or more) impressive for a large number of other teams at the meet. And, it must be remembered that Clovis is more or less at sea level, unlike most of the southwest region. So, take the race times cum grano salis. Clearly, Carson and Galena are good teams, but there is much yet to be learned about these programs.

Elko's girls tackled the Lowry Invitational field and came out with a big win. On what was reported as a 5K course, Elko's top five ran an average of  19:45, after running a team average of 21:02 at Bob Firman two weeks prior (where they finished 7th in the D1 race. Mary Jo Wright (who appears to have formerly run for Wells HS) led the pack at 18:31.

The big doings in New Mexico were on the Albuquerque Academy course which hosted the Albuquerque Public Schools Metro Cross Country Championship. AA easily won the boys' title, but the best boys' competition to be found in NM is, generally speaking, not domiciled in Albuquerque. Honestly, the more interesting aspect of this meet was supposed to be the girls race where the St. Pius X girls figured to give Eldorado a stern test. Well, maybe next time. Eldorado was dominant, scoring 44 to Volcano Vista's 95. St. Pius X was third with 105. Led by Coley Norcross's 19:20 on the 3.03 mile course, Eldorado posted an average scoring time of 19:41. I have a pdf set of results for this meet, but nothing easy to post. Unfortunately, it looks as if you're going to have to trust me on these results.

Try to imagine the consternation of the runners at the APS Metro Championship upon finding a water crossing on a cross country course in the second-driest state in the Union. Contributed photo.

If there were other results from New Mexico this past weekend with big NXN-SW implications, I've been unable to pin down those results.

Most of the major NXN-SW contenders in Colorado were idle this past weekend. Most, but not all.

Cherry Creek swept the titles at the Pat Amato Classic, winning the girls' title in the absence of Olivia Anderson. Jordyn Colter more than made up for any lapse the Cherry Creek girls might have been feeling, winning in 17:52.

Monarch sent a serious message to the field, and anyone else willing to listen, at the Andy Myers Invitational in Greeley. The Thompson Valley girls had no answers--at least on this day--for the power of the Monarch girls. With the return of a key runner, the Monarch boys posted easily their best outing of the season and now must now be considered among the region's top boys' teams. 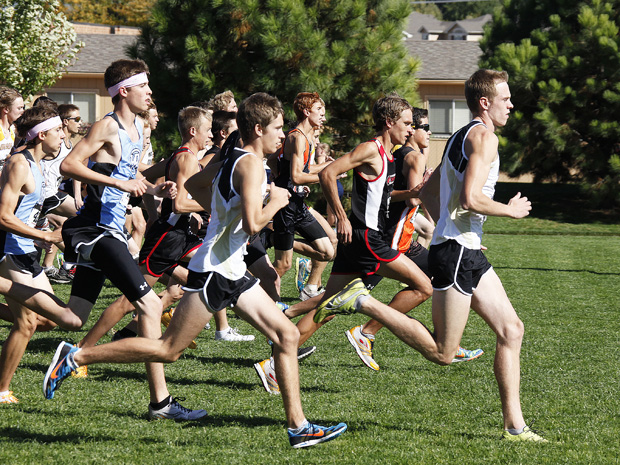 As things started at the Andy Myers Invitational, so also did they finish (Monarch sports the black shorts and white-and-gold singlets). Monarch's Kirk Webb led wire-to-wire. Photo by Jeff McCoy.

Arapahoe's boys, capitalizing on the recent return of Chris Davis to their lineup, made their case as a one of the state's top teams at the Windjammer Invitational.

Mountain Vista, Fairview, Fort Collins, and The Classical Academy were dormant over the weekend.