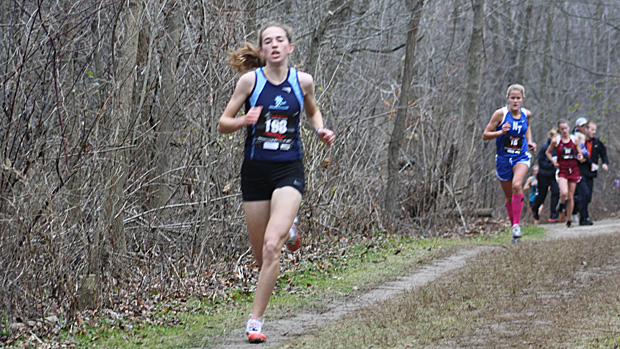 On Saturday, December 10, Sydney Scott will officially close out the 2011 high school cross country season for Colorado. Scott was the lone Foot Locker Nationals qualifier from Colorado and will be racing at Balboa Park in San Diego.

Scott competed at both FLMW and NXR-SW. She had hopes of making nationals in both, "I was planning to go to nationals for both if I got in. I was prepared, and trying to get ahead in school." That making-nationals-in-both part didn't work out, but she is nonetheless excited that she made it to one of the national races.

The Foot Locker race in Kenosha was something of a nail biter for Scott and her supporters. Scott estimates she was running at about 40th at one mile and maybe as high as 20th at two miles. She had no idea how close she was to qualifying until about a half-mile from the finish when a coach yelled to the girl in front of her, "You're in 13th!"

"Before he said that, I didn't know at all where I was," Scott admitted. But that revelation made it clear "I needed to pick it up and pass... It was an inspiration, and it got me to try even harder."

At the finish, Scott came through first of a group of three girls each clocking a time of 17:43. Scott's finish was sixth, easily high enough to advance her to next weekend's race in San Diego.

"The course conditions were great. It was cool enough to cool you off, but you weren't freezing. It was relatively dry. In some spots I was glad I had spikes; in other spots they were a pain."

Scott had no clear idea of the feel or layout of the UW-Parkside course prior to traveling out to Foot Locker Midwest. But she was not intimidated, "It wasn't that bad. It was nice to run it the day before and know where the hills were."

Over the years, countless other Colorado competitors have gone out, seen the course for the first time the day before, and not finished nearly as well as Scott did.

Scott's finish at FLMW and her finish at the 4A state race suggest that Scott might have something of a predisposition for running hills, "My dad lives in the mountains, and I have a lot of practice running hills, especially running up hills."

That extra practice, and a little bit of boost from lower altitude, just might pay off on the hills of the Balboa park course.

Scott has been coached by both John Gregorio at Denver South and privately by Lyle Knudson. She credits both coaches with giving her the motivation to "keep running and knowing the best way to train."

But Scott isn't a one-dimensional runner. She attends the Denver School for the Arts (even though she runs for Denver South). That little fact would indicate there's another passion for her in addition to running.

"It's music. I play the violin and that's my major at school. I've been playing for nine-and-a-half years and hope to go into that as a major in college."

Now, if only Sydney Scott can find a college that offers her the right opportunities in both running and violin....