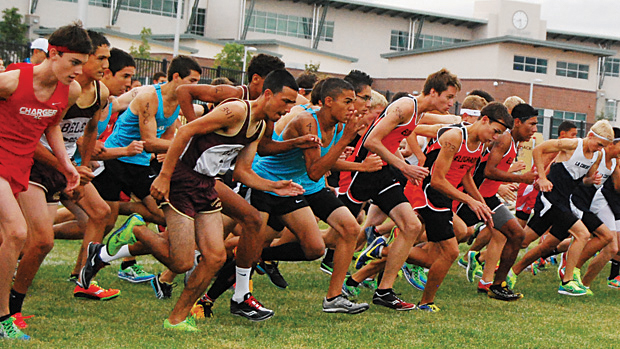 With huge meets coming up this weekend in Utah and Colorado, action may have been somewhat subdued this past weekend--at least by way of comparison to what's coming up this Friday and Saturday. Acknowledging that, we'll still take our best shot at what transpired over the last week.

There were two big meets in Nevada over the past weekend. Appropriately enough, one was in Las Vegas and the other in Reno.

Larry Burgess Invitational - What a difference a runner makes! Nevada, reintroduce yourself the Katie Gorczyca, the freshman phenom of 2010. Gozrczyca finished behind teammate Sydney Badger to give Centennial a 1-2 finish at this one. Centennial needs to close down the 2-3 gap and another gap at 4-5, but merits attention as a team to watch out of Nevada. The girls meet title for this one crossed the state line into California. Centennial also picked up top honors among Nevada's boys teams at this meet. Also of note here is the fact that the Page, Arizona, girls narrowly missed claiming the meet title, beating every team in attendance except Rancho Buena Vista (CA).

University of Nevada-Reno Twilight - I can't give you a link to results here, but I can pass along what I think is trustworthy information about the meet. The black-and-gold guys from Galena (interesting, because galena is neither black nor gold) took top Nevada honors in this 4K race. In fact, they were quite a bit ahead of everyone else. I believe Galena also topped the NV girls set at this meet, but mostly Nevada was wowed by the California teams that came over for a little run in the cool of the Reno evening.

We expect to learn a lot about Utah's top teams at this weekend's BYU Autumn Classic, but those top teams gave the appearance of laying a little low this weekend.

Ogden/Weber City/County Meet - I think the idea here is that everyone in Weber County gets together for a mid-sized meet and local bragging rights. If anyone was hoping to topple Ogden, they went away sorely disappointed. In the boys race, one competitor managed to squeeze into Ogden's top five. In the girls race, two managed to pull it off. Needless to say, Ogden won (decisively), again.

Wasatch Invitational - Don't be misled by times coming out of this race. Clearly, this animal has a bit more of a mean streak than most of the courses they compete on in Utah. At this point, only the boys race at this meet appears to have NXR-SW implications. American Fork took first relatively easily over Herriman. You get the sense from the results that American Fork was on cruise control, however. Herriman continues to look solid, but is rapidly accumulating a large number of full-length races. We'll continue to watch how that strategy works.

Murray Invitational - The ranks as one of the bigger invitationals in Utah, but probably not the biggest one on Davis's schedule. Still, the Darts have to be feeling lucky to have left town with a win in this one. Davis beats Bonneville in the boys race by a tie-breaker. And so, we add Bonneville to the already long list of Utah boys teams showing signs of the kind of hunger that turns good teams into great teams. A very good Mountain View team showed up well back in third.

For the girls at this event, Davis won, but with an effort that has a hint of restraint to it. Restrained or no, however, they still won by 40-some points. American Fork (the girls and boys went separate ways this weekend) took a very solid second in this one, beating an Orem team that beat them a couple weeks earlier at the Grass Relays.

Davis had a two-mile race on Tuesday and may just be exercising a little caution at this point in the season. Park City, an early favorite among the Utah girls teams, has struggled a little since opening week and those struggles were manifest in the results from this meet.

Ray Wherley Invitational - The score this one on total time rather than places and Xavier's brother school, Brophy College Prep, won the seeded event. Brophy, however, appears to have gap issues in their scoring five that will need to be closed down before they come a serious team contender at the NXR-SW level. Catalina Foothills leveled the girls competition in this one and did it in such a way as to mark themselves as a team worthy of a lot more attention. On a 2.6 mile course, the top five passed the finish line between 16:33 and 17:19.

Chandler Invitational - In stark contrast to Chandler's reputation in track and field, this meet is billed as an early-season low-key invitational. They break the thing up by classes (FR, SO, JR, SR) and do some funky scoring gymnastics to help emphasize the low-key aspect of the meet. Even so, Desert Vista and Highland didn't get the memo. Both teams ran, frankly, pretty well and did it with both their boys and their girls. We'll need more conventional meets to get a closer read on these two teams (and we already kind of knew about the DV boys), but these are teams we'll be watching weeks to come. And, while we're at it, we'll add Corona Del Sel to the list of watched teams.

Adobe Invitational - Scottsdale was the place, but Mesa Mountain View was the team. MMV put five girls into the top 13 (a trick they seem to have picked up from Xavier) to run away with the girls title. Included in that five-in-the-top-13 were Huston Jones in first and Angela Ellsworth in second. Front runners are a nice commodity to have.

Boulder Creek won the boys' event but, for now at least, without the appearance of NXR-SW implications.

St. Vrain Invitational - This was a monster meet with something like 60 schools in attendance and more highly-ranked teams than you can shake a stick at. Mountain Vista routed Fairview in the matchup of top-ranked boys teams. Chaparral ran a credible third and would get a lot of attention for their performance in many meets.

Among girls, a Fairview team that may have been short one or two runners slipped to fourth behind the wave of Monarch, Pine Creek, and Mountain Vista. Monarch retains their reputation as the best girls team in Colorado for the moment with the win, but Pine Creek figures to be a serious rival for the throne once Heather Bates comes out from under the requirements of Colorado's transfer rule in another couple of weeks. For now, you can check out the results of a likely measured effort by Bates in the JV G-Z girls race of this meet and do your own calculations on the impact she will have when she moves to the varsity roster.

Cherry Creek Invitational - It's difficult in this event to move from Jordyn Colter's 17:31 to the team scoring, but we'll try anyway. Arapahoe's girls edge Cherry Creek for one team title, but this is also an Arapahoe team that was clearly beaten by Mountain Vista the week before. So, while we're looking at performances of some very good girls teams, the St. Vrain Invitational likely had the stiffer competition. Still, keep Arapahoe and Cherry Creek on your NXR-SW girls radar screen. A heavily (but not completely) unloaded Fort Collins team ran a distant third in this one.

Among the boys, Cherry Creek looks even a little better this week than they did coming out of last week's Cheyenne Mountain Stampede. Creek was convincing in their win here. Arapahoe runs a distant second and Fort Collins a still more distant third.

Cleveland Invitational - The Cleveland boys fixed whatever went wrong on opening weekend and looked very much like the team that closed out the 2011 season so impressively. 1-2-3-5-7 is the kind of team scoring we grew accustomed to from this team. Expect to see more of it. Luis Martinez runs 15:23 for three miles, with the final scorer at 16:17. And, yes, Cleveland HS is at altitude.