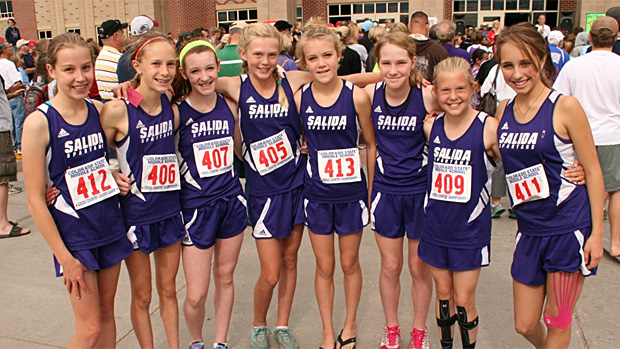 Bound together by one another's arms and a little bit of kinesio tape, Salida's girls celebrate a "we" state championship. Photos by Megan Percy.

Some days, it’s just a good day to be a runner. For the middle schoolers at the Colorado Middle School State Cross Country Championships, Saturday was one of those days.
The smoke of the starter's pistol had barely cleared before the leaders of the pack were established in the girls championship race. Lauren Gregory and Julia Vitella led the race the entire time, with Quinn McConnell in third.
Gregory, from Preston Middle School in Fort Collins, won the race in 13:05, a nice culmination to an impressive middle school career, and one place better than her second-place finish last year. But racing among competition she had never seen before brought a new layer of challenges, “It was a lot different…it was really scary especially since you just never know what’s going to happen.”
Cleary she overcame those fears. High school cross country runners, watch out, Fort Collins adds another speedy lady to their team next year. 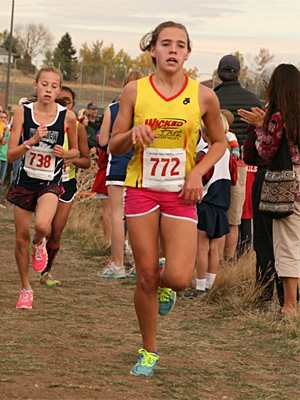 Julia Vitella, running unattached, led the race for about a mile before Gregory took the lead. Julia, who placed second, didn’t let Gregory get too far ahead though. She finished at 13:18--not a bad way for her middle school career to end either. She came in “hoping to get second or first," and accomplished that goal. Quinn McConnell, Peak to Peak, finished in third at 13:28. Chantae Steele, a sixth grader from TCA, finished fourth, and Devon Kroeker, unattached (pictured, left), took fifth with times of 13:34 and 13:43, respectively.
On the boys side, it looked as though a winner was established at the start. Tyler Scholl led the race the entire way until Andrew King, Westveiw Middle School, punched the gas right before the finish. He won the race in 11:54, fulfilling his expectation that he was "determined to win today.” King will be running in high school next year and, although a little nervous about the extra mile, he looks forward to the challenge.
Tyler, on the other hand, is only a sixth grader who just turned twelve. This race came as an early “opportunity to run against kids his age,” commented Lyle Knudson, Scholl's coach. “[He] finds out in a race like this there’s other people training and competing too.”
Tyler Scholl took a very positive outlook on the race and his future, “I pulled it out and ran as hard as I could, and that’s all that matters. Good for the first place kid, he beat me fair and square… I mean, I enjoy every day I run.”w ith a time of 12:02 and a runner-up position to celebrate, is was a good day to enjoy.
Third through fifth place fell as follows: Tanner Norman, TCA, 12:15; Isaiah DeLeCerda, Alamosa, 12:31; and Landon Rast, Cimarron Middle School, 12:33.
But cross country is not just about the individuals. There were runners here for a team title, not an individual one. The boys side crowned new champions as TCA stepped down, letting Westview Middle School (Longmont) take the title with a score of 29 (1, 6, 11, 16). That team total left second-place Oretega (Alamosa), with 62, well out of reach.
By their own account, the Westview boys weren’t supposed to win, "We are definitely the underdogs but we wanted to make the top three." Job well done, Westview.
Third place Walt Clark (Loveland) posted a score of 64.
The girls champions were just as enthusiastic. Salida enjoyed a fantastic day in their office out-of-doors, focusing just enough on team to win.
“We wanted our team to win. We cared about our individual scores, but we were more about our whole team winning, so we all kinda worked together so our team could get first instead of just us.” And Salida coach Sarah Wilcox could not have been more proud, “We talked about being a "we” team. Together we are stronger than how we are individually and they got that.”
Bill Reed Middle School (Loveland) took second with 62 points, and Denver Center for International Studies took third, scoring 73.
There were also countless individuals and teams just glad to have had the experience, celebrating the joy of competing. They ran their hearts out, rewarded in full by their own efforts.
Congratulations to the individual medalists, and the teams. Fantastic job! But congratulations are also in order for those who stand for cross country and all that it is: teams, individuals, and those who have the courage to start and the strength to finish.
Meet Results, Photo Albums
Tweets by ColoradoTrackXC