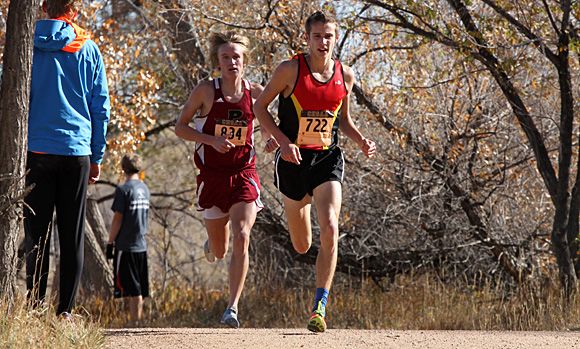 One week ago, Ponderosa's Eli Hemming was in Auckland, New Zealand, competing in the ITU Junior Men World Triathlon Championships. That event consists of a 750 meter swim, a 20K bike ride, and a 5K run. Hemming was the top American finisher in 29th, beating out Tony Smoragiewicz (another name with some serious cross country connections) in 34th.

A little more than a week ago, I commented that an activity like that held the potential to "mush up the legs" a little bit. Apparently, Hemming wasn't taking notes.

It wasn't long into Saturday's 4A boys race before it was evident that the list of potential winners was down to two--Hemming and Coronado's Bailey Roth. Hemming let Roth do the pacesetting, but it was evident that Hemming was ready to cover any breakaway attempts.

By the return trip through the bridges section of the course, Hemming had the lead, and it was evident both were pressing with whatever remained of their energy. Up the final two ascents to stadium level, Hemming send the pedal to the floor. Roth had no answer. Hemming would win by just over ten seconds, something on the order of 50 meters of cross country space.

When you take on the best the state has to offer and put them away as Hemming did, it's tough to argue with the formula that got him there. Some guy out of Illinois with Lithuanian ancestry worked the same formula to considerable success a couple of years ago.

Hemming is a senior and so will not have an opportunity to make a victory tour again next fall, but what a way to go out for a guy who had never qualified for a state meet (cross country or track and field) until this one. Even this one, he had to qualify for via a surrogate arrangement. Since Hemming was in New Zealand, his only chance to qualify for the state meet this year was for his team to qualify out of regionals and allow him to run in one of the seven places allocated to each qualifying team.

That's a lot of twists on one person's story.

While Bailey Roth's best effort was relegated to second, the day had a happy ending for the Coronado leader. And, it didn't take long for that happy ending to develop.

With Roth's race done, he had only to turn around to see the wave a red, gold, and black breaking over the finish line. Dan Egger in 11th. Andres Luna in 18th. Adam Egger in 19th. Schuyler Vandersluis in 22nd. Adjusted for team scoring, it went 2-10-16-17-20, for a total of 65. And that beat a very good Cheyenne Mountain team in second by 41 points. Third-place Thompson Valley was another 50 points in arrears. Hemming's Ponderosa team would end up in 10th.

For Coronado, it is a first-ever state title in cross country. Coach Doug Hugill has been there once before, however, winning at his alma mater of Wasson High School in 1995 on the ill-fated Aurora Reservoir course.

The individual third went to Windsor's Justin Weinmeister. After dropping well behind Hemming and Roth midway through the race, Weinmeister put together a strong finish, ending only three seconds behind Roth.