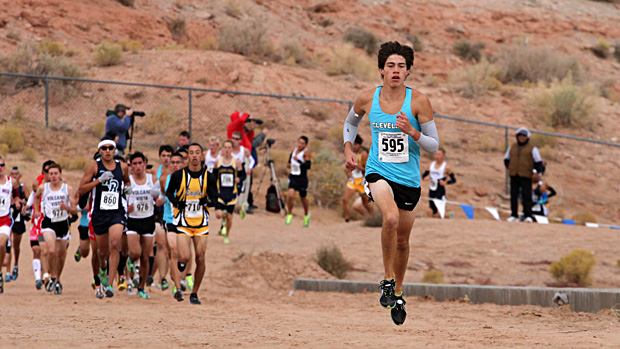 Luis Martinez had a stellar senior cross country season for the Cleveland (NM) Storm and heads into Saturday's NXR-SW championship race as one of the favorites for the individual title as well as the leader of a team very much in the hunt for an NXN berth. Photo by Alan Versaw.

If it needs to be said, you are probably late joining the conversation, but we'll say it anyway: this has been an over-the-top kind of year in boys cross country in the Nike Southwest region. What got it done last year is old news. The same efforts won't get it done this year.

2012 will be the deepest, toughest, NXR-SW field on record. By a lot. So, let's start discussing how that happened.

American Fork has owned the NXR-SW team title for three years running. That little dynasty appeared to be in danger last spring when Davis dominated everything in sight from 800 meters on up at the Utah 5A state track meet.

But, apparently, Davis's domination on the track only served to rekindle the fires of motivation at American Fork High School. From the opening meet of the season at the American Fork Grass Relays, AF has had Davis's number on the cross country course. To be blunt about it, nobody has seriously threatened American Fork all season long. They are the class of Utah high school cross country, again.

Which is not the same as saying the rest of the state is chopped liver.

Quite the contrary, it was an incredible year of cross country in the Beehive State. While Davis and American Fork had a lot to do with that description of incredible, another substantial portion of the reason behind that description came via the 4A ranks courtesy of Herriman and Bonneville. Just a step behind were teams like Ogden, Riverton, and Mountain View. And every last one of those teams is coming to Arizona!

Utah has a few more than seven teams entered in the championship race, but these seven teams figure to be the ones doing the bulk of the damage. And, in a field where only two advance, seven credible contenders from one state is a big deal. Of those seven, however, make no mistake of the fact that American Fork, Davis, Herriman, and Bonneville constitute the big four. The rest, as good as they are, are hoping for a miracle.

And, how credible are the the top four? Well, among the top four, Bonneville lost to Davis on a tie-breaker at the Murray Invitational and lost to Herriman on a tie-breaker at the Utah state meet. There is, of course, no guarantee that a tie-breaker situation one week means the teams are similarly matched in a different meet the next week, but these teams are exceptionally good. And, having to keep pace with their in-state rival has kept them both honest and hungry. While American Fork is a legitimate top-five team nationally, the others are each enjoying (or should be enjoying, in the case of Bonneville) national visibility.

You get the picture--it's tough in Utah. Do any other states have a chance?

As a matter of fact, yes. It's definitely been a banner year in Utah, but there's been some more-than-merely-decent cross country coming out other states as well.

There's been a very good team by the name of Rio Rico making noise in the Arizona desert. Their team time at the Arizona state meet was a whopping two minutes better than the best Division 1 team time. Some of that may have something to do with varying race conditions, but Rio Rico just might be the best Arizona team ever to show up at this meet.

Centennial has enjoyed more or less free run of the Silver State. Not coincidentally, they are also the lone Nevada boys team entry in the championship race. They will have their plates full with much stiffer competition than they are accustomed to seeing in their home state of Nevada. In truth, though, the best Nevada teams regularly travel to California for meets, so it won't be as if Centennial comes to NXR-SW never having seen this kind of competition before.

The top two Colorado entries are Mountain Vista and Fairview. Both teams, however, struggled a little at the Colorado state meet. While both schools validated their ranking against the best competition Colorado has to offer, it's more than likely both are coming to Arizona feeling that they have something to prove with respect to being better teams than their state meet performances indicate. It should be noted that the Colorado state meet course was new this year, and the combined impact of a 1) crowded and 2) difficult course made for some strange outcomes in the state meet results. It seems likely that both Mountain Vista and Fairview fell victim to the course's double whammy (though not necessarily any more so than other teams).

By all outward appearances, however, Utah's stiffest competition at NXR-SW should be coming from New Mexico.

Los Alamos has traveled out of state once this season and used that opportunity to take the entire Desert Twilight field to the woodshed. And the whipping they administered there was a memorable one. Los Alamos has treated their in-state brethren in the same fashion--except for one team.

That one team would be Cleveland. After a lackluster opener on the UNM Lobo Invite on Labor Day Weekend, Cleveland has been unstoppable. Los Alamos has managed to keep it close whenever the two titans have collided (three times since UNM), but Cleveland has managed to get the better of all subsequent encounters. Los Alamos runs a very tight front five or six. Cleveland strings it out more, but when Luis Martinez is your #1, you tend to relax your hopes and expectations of a tight pack time. In this case, a 1:15 1-5 gap just might be a good problem to have.

The New Mexico schools, however, do have an apparent obstacle to overcome in that their New Mexico state meet was just this past Saturday. Ramping up for state on one Saturday and NXR-SW the next could prove to be a tall order. We'll see what comes of that.

While we're speaking of that deck of cards, it's worth noting that Utah holds the other joker. Utah finished their state-sanctioned season on October 17, exactly one month before NXR-SW. One month is a long layoff. There's been a race or two in the interim, but it's still tough--by anyone's standards--to keep the fire properly tended for an entire month. American Fork has done a nice job of it in the past, but the other Utah schools haven't always been as sharp as AF when NXR-SW has rolled around, although the Davis boys seem to have nailed it the last two years.

Our discussion to this point has omitted several quality teams in the NXR-SW boys field, but it should throw a canopy over all of the top contenders nevertheless.

Conventional wisdom has American Fork pegged as the top team, with Cleveland, Los Alamos, Davis, Herriman, and Bonneville constituting a very competitive cluster for the coveted second qualifying position. Depending on how much their state meet performance was a deliverance of the course, Mountain Vista could qualify as a dark horse contender for the second NXN slot.

Are chances good for an at-large bid for the Southwest? Probably not.

A weaker showing this year than last at Bob Firman probably hurt the region's chances for an at-large bid. At the very least, it's clear that this region cannot afford any gaping holes between the second and third-place teams if there's to be any chance of an at-large bid. Last year's at-large committee clearly frowned on that sort of thing, and this year isn't likely to be much different.