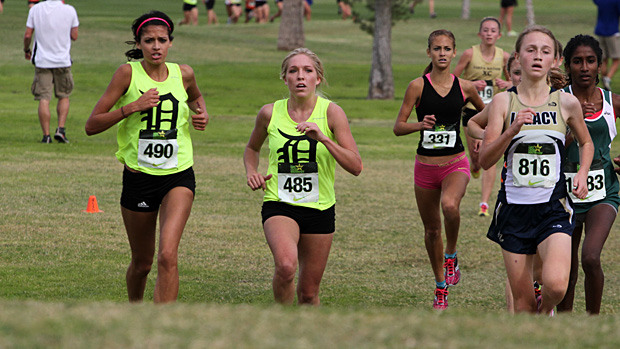 Led by a 6-7 finish (3-4 in team scoring) from Shea Martinez and Ellie Child, Davis took away top honors in the Nike-Southwest regional. Photo by Alan Versaw.

All season long, the top three slots in the regional girls rankings had belonged to some variation on the order of Xavier, Fort Collins, and Monarch. And perhaps that grated just a little on the Davis team. Or maybe it was a little bit of frustration stemming from a state meet performance of a month ago that didn't quite live up to their own usual standards. Or perhaps a little of both.

In any case, Davis came into the meet with something to prove. And they managed to prove it before the racing was done. Shea Martinez and Ellie Child led the charge for Davis, both nailing down places in the top ten. That gave Davis the most favorable start on their scoring of any team in the field.

That start left the clean-up work to Taylor Cox, Kenzie Weir, and Kami Dixon. The three cleaned up nicely, taking team scoring places 26, 30, and 31, leaving Davis with a team total of 94 points.

Fort Collins got top-20 finishes from Erin Hooker and Devynn Miller en route to 104 points and second. That second-place finish kept the streak of Nike Cross Nationals appearances alive for Fort Collins, but also marked the first time in the six-year history of this event that Fort Collins did not win the race.

Third place went to the seven--wait, make that six--from Pine Creek. Pine Creek had been nipping at the heels of Monarch and Fort Collins all season and finally had the kind of race that evidenced their full potential. Pine Creek's 107 points should put them in favorable position for an at-large bid to Nike Cross Nationals, but they get to wait an entire week to find out the outcome of that possibility. It looks like a very long week ahead in Colorado Springs.

Xavier College Prep, ranked first in the region going in, slipped to fourth with 131 points. While that technically leaves them alive for an at-large bid, it's a long-shot, at best. The team that ran so very well in September struggled to find their edge in November. Monarch, another regional team of no modest reputation, slipped to seventh.

One can scarcely help but notice the emergence of Utah teams among the regional powerhouses. This year, Utah teams claimed places 1, 5, 6, 9, and 10 in the regional top ten. That gives Utah a top-end presence at this meet on a par with Colorado (places 2, 3, 7, and 8), the state that has dominated the Southwest girls competition in previous years. Noteworthy among the Utah entries is the fact that the fifth and sixth-place teams, Park City and Ogden, are both 3A schools.

On an individual level, Niwot's Elise Cranny won the race in an eye-popping 16:59.9, easily obliterating the course and meet records in the process. She was followed by Colorado companions Katie Rainsberger in second (17:11) and Heather Bates in third (17:18).

A nice layer of clouds that hung in the entire morning kept the cool morning air around much longer than normal for an Arizona morning and almost certainly played a key role in seeing 21 girls finish under 18:00, and a total of 97 finishing under 19:00. The pacing of this race was not for the faint of heart, but it did work out for a bargeload of PRs for athletes coming to this event from higher altitudes.