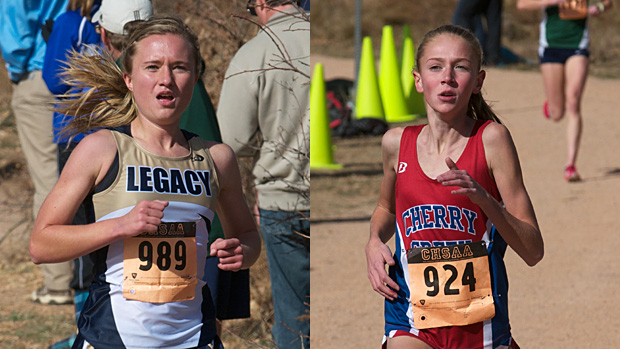 Melanie Nun and Jordyn Colter will be wearing the colors of the Midwest team, but their rooting base lies squarely in the state of Colorado.

The season that began about as soon as track season ended is itself about to come to an end. Stellar performances by Elise Cranny, Heather Bates, and Katie Rainsberger punctuated last Saturday's action, but the final word on the season gets to be written by Cherry Creek's Jordyn Colter and Legacy's Melanie Nun.

For Nun, this Saturday has the added distinction of closing out a high school career that kept getting better and better. We'll see what she has in store for her final race.

For Colter, this Saturday is hopefully another step toward blotting out the memory of the dreadful day at state where she had nothing more left to give beyond two miles. Her FLMW performance indicates there may be just a tiny bit more of coming back to do. Saturday in San Diego provides the ultimate opportunity to do just that.

At Foot Locker, there is little to do but run hard. But, for folks who aren't accumstomed to having a lot of company in a race, the feel of a competitior hanging around just off the shoulder can seem a bit foreign. Everyone in this race is at "that level."

Take Sarah Baxter and Mary Cain out of the analysis. They won't be there. But girls like Anna Rohrer, Catarina Rocha, and Sophie Chase will be there. And what to make of Marissa Williams, a newcomer on the scene who destroyed the field at Foot Locker West?

Find out on Saturay how it all unfolds!

Note: MileSplit National will is scheduling video interviews of all contestants on Saturday afternoon. Those interviews will be linked here as they become available.