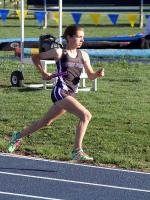 There is no "I" in gold...
Marcelo Laguera shares a few thoughts on his state title with Tim Hilt. Photo by Karen McCoy....

3A girls: TCA exits stage right...
Hannah Carr winds up on a state meet record mark of 143-9 in the discus. Photo by Alan Versaw....

Friday notes: 3A...
Coal Ridge extended their tradition of relay excellence with a big win in the girls 4x200. Photo by Alan Versaw....

Thursday notes: 3A...
Sarah Yocum had a very nice first day of her first state meet, with promises of more to come. Photo by Alan Versaw....