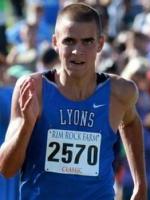 Throwback Thursday: Colorado Stars Back In The Day...
Three future 800 state champions, side by side......

Top 10 Stories Of 2017, #3: Tanner Norman Takes Down 32...
Tanner Norman had the advantage of running under the lights in Pueblo, he had the disadvantage of chasing the record in an almost entirely solo effort....

Top 10 Of The Last 10: Boys XC...
When it comes to a four-year career posted over the last 10 years, nobody matches the standard set by Paul Roberts....

Colorado Makes Tracks For Kenosha...
The same Denver North girls who staked out an intimidating early lead at the St. Vrain Invitational in September are headed for Wisconsin this weekend....