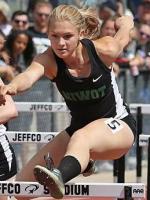 Top Colorado Athletes Heading To The Coasts This Weeken...
Madison Mooney tries to take her PR below 4:47 this weekend in Seattle....

First Valor Twilight A Solid Success...
Mary Gillett got way out in front of the girls 200 meter field....

A Great Southwest Gallery Of Colorado Girls...
Anna Hall set an outdoor PR in the high jump but missed out on a meet title on misses....

4A Girls: The Deep Dive...
Lauren Offerman, Kasey Klocek, and Maria Mettler are just three of the faces in an absolutely loaded 4A Girls 1600 field....