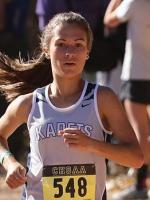 Two Weeks Until The Air Force High School Open...
Last year's stirring boys 800 contest between Hayelom Fitsum and Yanique Borne provided what was arguably the highlight of meet, which is not to say the meet was otherwise lacking in highlights....

All-Time Top 25 Colorado Girls Times At Desert Twilight
Tatum Miller backed up her 17:42 last year with a 17:45 this year, giving her two Colorado top-ten times at Desert Twilight in as many tries....

Top Colorado Athletes Heading To The Coasts This Weeken...
Madison Mooney tries to take her PR below 4:47 this weekend in Seattle....

4A Girls: The Deep Dive...
Lauren Offerman, Kasey Klocek, and Maria Mettler are just three of the faces in an absolutely loaded 4A Girls 1600 field....