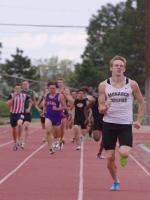 Colorado Alumni Report: March 31 - April 6...
Kevin Williams was one of the best high school distance runners Colorado has ever seen. He&#39;s been enjoying a highly successful career at the University of Oklahoma in more recent years. Photo cour...

Achievement of the Year: 2012...
As with any other year, there were several outstanding achievements in the sports of cross country and track and field. In this article, we try to narrow it down to a single most significant achievement.

Memories that Linger: 2012...
Kirk Webb took it out hard on lap one and we all held our breath on lap two, waiting to see what would happen. Photo by Jeff McCoy....

Colorado Track XC All-Classification All-State...
On the first lap of the 5A boys 800, Kirk Webb still had a lot of company. On lap two, it was a different story. Photo by Alan Versaw....