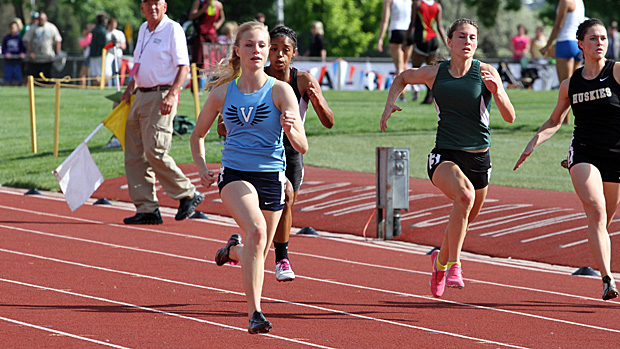 Being naturally gifted in the speed department has put Marybeth Sant, and a few other Colorado athletes, in high demand. And little hard work along the way,of course, hasn't hurt anything, either. Colorado Track XC file photo.

The Brooks PR meet is supposed to be a once-in-a-lifetime kind of deal. Only it's not working out that way for some select athletes. Colorado has a few of those athletes. Marybeth Sant is one of those, but Dior Hall and Heather Bates will also be making return trips to Seattle's Dempsey arena track for what may be the most elite high school indoor meet of them all.

Last year, Sant ran 7.45 in preliminaries at the Brooks PR meet. That was barely good enough to get her into the top heat of finals. In finals, she ran 7.48 to finish seventh overall. Something about that doesn't sit well with Sant, "My coaches and I have worked very hard to prepare for this year. My goal is to win with a new PR." 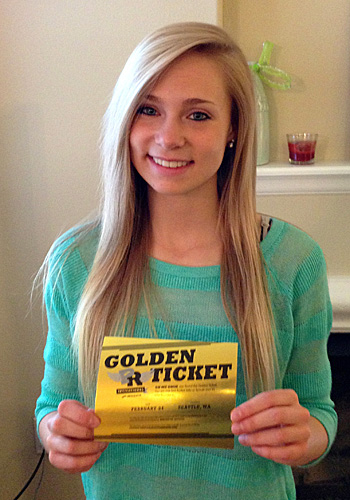 If you've been paying attention during this winter's indoor season, you know there's nothing unfounded about that kind of goal. Sant owns easily the best 60 meter time in the nation thus far this winter with a 7.30. Next best is 7.45, and Sant just finished beating the owner of that mark straight up in the finals of the 60 meter dash at the Simplot Games.

But, it's also true that nothing is guaranteed about Sunday's outcome. The experience of having been there before means Sant knows exactly what she is up against, "I was completely amazed at the talent that I competed against last year at the Brooks PR. Most of the girls ran times of 7.4 or better. The experience last year helped me prepare for my season this year and the hope of being invited back. I am honored to be here and hope to improve on my current PR of 7.30 and know that the competition will help me get there."

In a race as short as 60 meters, and in a field such as the Brooks PR brings together, just about everything--beginning with the start--has to work to near perfection. Even a minor failure at any point in the race opens the door for others will blow right by you. Sant had a great start at Balch Field House a few weeks ago when she blasted the 7.30. As solid as she's been all season, she's probably going to need another start in the same league as the one of the record-setting race at Balch on Sunday.

A lot of eyes, eyes in Colorado and even across the nation, will be watching. Last year, Sant wasn't a favorite. She was simply part of the field, though certainly a highly select field. This year, she goes in as the favorite and must shoulder the expectations that brings. One thing that is apparently not in question at the moment, however, is her health. Her assessment there is short and reassuring, "I feel great."

And that's probably not good news to the ears of the rest of the field, though the truly great athletes always want to face their competition at their best. If so, it looks as if they'll have their wish in this case.

Sant's pre-race routine differs little from that of many top athletes. She knows what works for her, and she sticks with it, "Prior to warming up I visualize my race from start to finish. While I am warming up, I listen to my two favorite inspirational videos to get myself mentally and physically ready. I go through the same routine before every race."

As the old saw goes, never change a winning a plan.

While the Brooks PR meet is clearly a major event in the life of the blonde-haired sprint phenom, the reality of Sant's life is that she will have more to think about the moment her race in Seattle is over.

"I will be competing in Albuquerque [at the USA Indoor Track and Field Championships]  the following weekend and possibly in New York for the New Balance Indoor Nationals the weekend after." Then, and only then, does she get a little bit of a break, "Once I finish my indoor season I will rest for about two weeks before training for the CHSAA outdoor season."

Beyond that, Sant will, no doubt, be in demand for some post-season outdoor events before heading to the University of Oregon where she attempts to take her sprint career to the next level.

In between races, Sant appears little different from any normal American teenager. Her tastes in food are, well, familiar, "My absolute favorite food is guacamole. I also love sushi, steak, chicken with rice, and smoothies." Nothing that sets her apart from the rest of the nation there.

Her taste in animals, however, does set her apart from a few. Reptiles are cool by Sant, "I have had two pet snakes and caught a wild alligator in the swamp," but she reveals a slight chink in the armor when she lets on, "but I am deathly afraid of spiders."

Not to worry, Marybeth, there isn't a spider on the planet, with or without blocks, that could catch you.