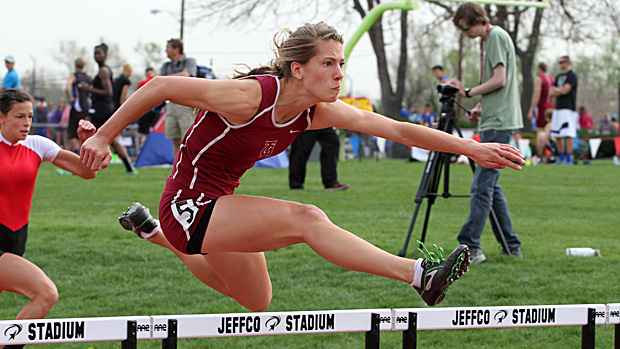 TCA's Alexa Chacon flew to two new 3A state meet records in the 100 and 300 meter hurdles. Photo by Alan Versaw.

It did not take long for The Classical Academy boys team to learn that a second-consecutive state championship was in order on Saturday. The TCA girls took a little longer to finish sealing their own trophy deal, but there was little suspense down the final stretch as the Titans took home both golden trophies.
Track and field tends to be a sport with good camaraderie and healthy, but controlled, rivalry. So when Coal Ridge’s Andy Bowles went down in the 110 hurdles, there was no cause for the TCA's Titans to celebrate, but there was a realization that the team with the best chance of running alongside them would be without one of its major weapons the rest of Saturday. 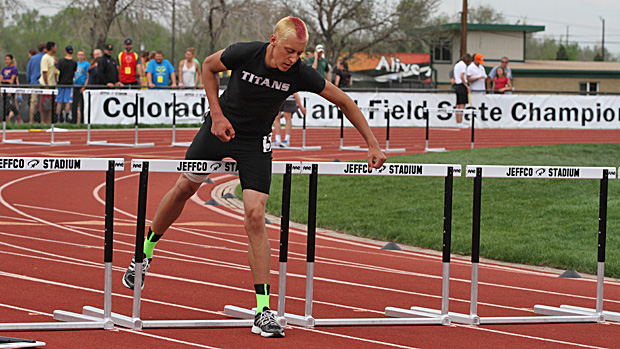 Credit, however, accrues to Bowles' account, who chose to limp/walk his way through the 300 hurdle final with a heavily-taped hamstring in order to give his team a point and finish out his season (photo, above, by Alan Versaw). It won’t be Bowles’ last rodeo, as the junior will return next year with tremendous promise as one of 3A’s top hurdlers.
TCA’s title chances were significantly boosted by the strong return of senior Collin Scheer, who had only competed in two meets all season prior to the state meet. Scheer’s win in the triple jump, second-place in the long jump, and sixth place in the high jump brought the Titans 22 points that nobody would have expected two weeks ago.
The race that clinched it for TCA’s boys was the 400. Nick Deray and Clark Mourning finished 1-2 in the race, duplicating their seeds entering the race.
Interestingly enough, the Titans were able to win the title with just those two individual wins. Yet TCA earned points in 13 of the 18 events.
Runner-up Coal Ridge brought home more individual golds with wins in the 4x100, 4x200 and 4x400 relays, and another from Jorge Hernandez in the 200.
TCA's ladies brought home the largest count of golds in the girls field and another large team trophy.
The Titans sensed the battle was won after Eaton’s amazing feat of qualifying four in the 200 finals resulted in only 15 points, five fewer than their original seedings indicated. After that race, Eaton had no realistic chance of catching the Titans even though that race gave Eaton a momentary lead in the tally of team points.
And the TCA girls didn't miss a beat on the final day of the state meet.
Enjoying the biggest day of them all was senior Alexa Chacon, who set two Class 3A records in the hurdle events. The Air Force Academy bound senior smoked the field with a 14.23 in the 100 hurdles and came back with a 42.75 in the 300s. Pagosa Springs’ Gabby Pajak pushed Chacon and finished runner up in both races. Pajak's 300 hurdles time also bettered the existing state meet record.
Winning two individual gold medals proved to be contagious for the defending champion Titans. So was performing above seed. Hannah Carr won both throwing events after coming in seeded second in both. Lauren Hamilton was seeded second in the 1600 and 800 and also came away with two titles.
One interesting fact in the Titan’s win was that they did not score a single point in the jumps or pole vault. For those of you keeping score at home, they tallied an impressive 112 points on the track.
On the strength of their speedsters, the Eaton girls finished second. They won the 4x100 and 4x200 relays and also got an individual title from Jazmin Schwark in the pole vault.
Chacon’s state records would make her our unofficial 3A athlete of the meet. State records in 3A did not come easily. Sterling’s Truitt Parrish was the only other 3A athlete to break a state meet record, and he came down from 4A last year to do it.
Other double champions included Ellicott’s Alex Hill in the boys’ throws and Brush’s Anthony Thomas with the tough 3200 and 1600 double.
Looking ahead, James Irwin made a statement for the future in the short sprints. Alicia Lawrence made the progression from qualifier as a freshman, to placer as a sophomore and now double-champion as a junior. She came on strong at the end of the season and, although she was seeded no higher than third in either race, won the 100 and the 200. Her teammate Miguel Molas was .01 from his own double title. He won the 100 but was outleaned in the 200 by Coal Ridge’s Hernandez.
Tweets by ColoradoTrackXC