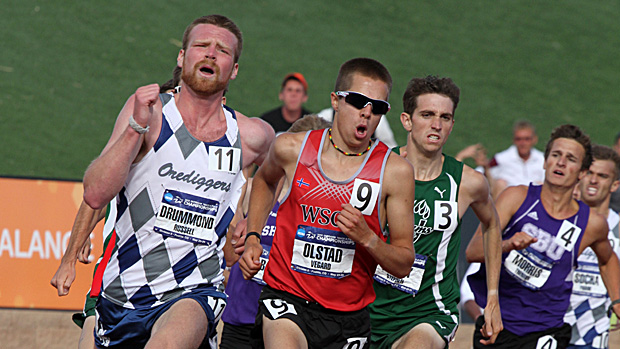 Russell Drummond, Vegard Olstad, and Stephen Emery round the final turn of the men's 1500 at the front of the pack. Photo by Alan Versaw.

It's a lesson not lost on many track and field fans here in Colorado, but apparently the lesson bore repeating. When it comes to DII distance, don't mess with Colorado. And especially not at altitude.

The distance and longer middle distance events at DII nationals belonged to the Colorado schools.

In Saturday's men's 1500, Russell Drummond of Colorado Mines battled Western's Vegard Olstad all the way to the finish line before losing by 0.7 seconds. Behind them, the Adams State tandem of Matt Daniels and Stephen Emery were cleaning up in third and fifth.

Metro State's Breanna Hemming logged a thrid in the women's 1500.

Later in the evening, the 5000s saw an even clearer piece of Colorado domination. Alicia Nelson wore down women's 10K titleist Brenae Edwards and then dropped a punishing final lap to win in 16:56.82. Covering Nelson's back were teammate Lauren Martin in fifth, and Metro's Janelle Lincks in seventh. Adams' Kelly Lamb finished in tenth but may have had one too many steeplechases on her legs from Thursday and Friday to come into All-American status.

Tabor Stevens of Adams State helped set the pace at the front of the men's 5000 for several laps before the impact of back-to-back steeples began to settle in for him as well. Stevens would fall back as far as seventh before staging a late rally to finish fourth at 14:40.58. But, Adams State's loss was merely Western's gain. About the same time that Stevens could no longer sustain the lead pace, Gabe Proctor of Western began hunting the leaders. As Proctor did in the 10K two nights before, he amped up the pace late in the race, went by American International's Glarius Rop on the last couple laps, and put things away. Proctor's winning time was 14:27.77. Rop kept it closer than in Thursday's 10K, but still could not match Proctor's closing speed.

David Sanchez of Adams State rounded out the list of Colorado 10K All-Americans with a sixth-place finish.

All of this merely piled on to what had been achieved on days one and two of the national championship event. The steeples had been won by Alicia Nelson and Tabor Stevens and included four additional Colorado-based All-Americans. Gabe Proctor won the men's 10K event to lead a parade of three more from Mines, Adams State, and Western earning All-American honors. 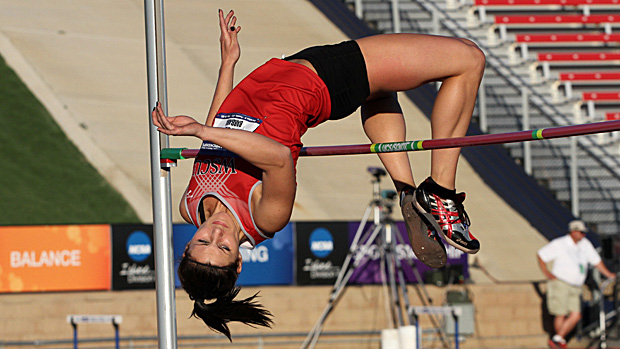 Proctor's two wins and Olstad's 1500 title combined with a high jump title for Barbara Szabo to give the Gunnison school for national championships for the meet. Szabo cleared 1.87m (6-1.5) for her win.

Adams State rode a series of strong performances on the men's side on Saturday to claim a third in the team standings. In addition to the Stevens-Sanchez finish in the 5000, Adams picked up key points from Wesley Lavong (5th, shot put), Carlton Lavong (3rd, triple jump) and the tandem of Daniels and Emery in the 1500.

Team title competion was dominated by St. Augustine's on the men's side (105 points) and Academy of Art on the women's side (60 points).