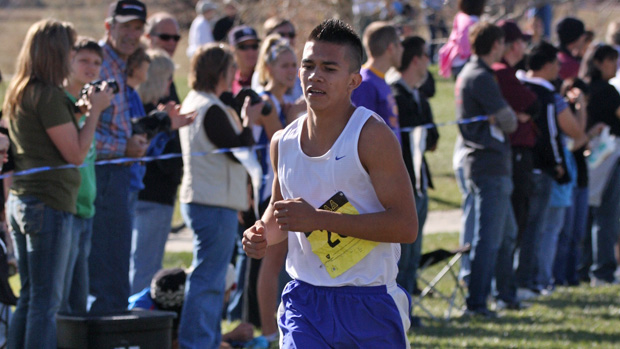 But cross country remains strong in the San Luis Valley. Let's take a closer look at the teams and the meets.

Alamosa was long classified as a 4A team, but recently dropped to 3A with declining enrollment. Since Larry Zaragoza's arrival as coach in the early 1980s, Alamosa has rarely been far from the top, regardless of what classification they were running in. Three times, they have come home with a team state title. Pat Melgares and Adrian Arnold have won individual state championships. The standard of excellence continues to this day. In the last four years, Alamosa has come home from the state meet with one first, one second, one third, and one fourth. Only a very small handful of schools have experienced more recent state success than that.

Alamosa's mascot is the Mean Moose, but it wasn't always that way. In a previous generation, Alamosa was known as the Maroons, but the Mean Moose ("Moose" being a sort of corruption of Alamosa--as in Alamoosa or just Moosie) stuck where Maroons did not. Alamosa, however, can be happy that the school retained maroon as the color rather than converting to moose brown. "Alamosa" is Spanish for cottonwood, and the town is named for the narrow-leaf cottonwoods that grow along the Rio Grande where the town was settled. Armed with that little bit of knowledge, you might be able to extrapolate something about the meaning of the New Mexico city names of Los Alamos and Alamogordo.

Centauri was Larry Zaragoza's coaching gig before Alamosa. In his time there, Centauri was the perpetual burr under Lake County's saddle. Three times, Zaragoza's Falcons pushed Lake County aside for a state title. Elliott Salazar remains the most decorated runner in Centauri history, with a 1978 state title and a 1977 state runner-up to his name. His track resume was equally impressive. If you know your San Luis Valley politicians and think Salazar's name rings somewhat familiar, your suspicions about a connection between the two would be well-founded.

As a side note on Larry Zaragoza, he is the only coach in Colorado history to win both boys and girls state titles at two different schools. The list of coaches who have won titles of any sort at two schools is very short, but Zaragoza is unique in having led both Centauri and Alamosa to state titles for both genders.

Sargent won individual titles via Cruz Zarco and Amy McNitt but never quite managed to capture a team title. Incidentally, Cruz Zarco is the only Foot Locker finalist ever to come out of the San Luis Valley. For whatever reason(s), Sargent's girls teams have enjoyed a far greater level of success than their boys teams ever have. If you've ever puzzled over the location of Sargent, the tiny community of Sargents near Gunnison is not the clue you need. Rather, the high school sits about midway between Monte Vista and Center.

Center got an individual title from Aucencio Martinez and a third-place team finish in 2003, but--like neighboring Sargent--has never visited the top of the team podium. Antonito, Del Norte, and Centennial have also enjoyed some very successful years in their respective histories, including 1985 when Antonito finished second in A-2A girls, but none of these schools have never brought home the big trophy.

Moffat, Sangre de Cristo, Monte Vista, and Sanford have each had teams in the past but now send interested student-athletes to other schools to compete in cross country. Ironically, Monte Vista's program folded after a third-place finish in 3A boys in 2006.

The one remaining big meet in the San Luis Valley is the Joe Vigil Invitational. This one is a joint high school and college affair at the Cattails Golf Course on the north side of the river in Alamosa. Historically, the course runs extremely fast, and all the more so considering that Alamosa is over 7500 feet of elevation. In addition to hosting the San Luis Valley teams, the meet typically pulls schools from New Mexico and from the west side of Wolf Creek Pass. A team or two from the Front Range often makes the trip over a pass or two as well.

Center and Del Norte host smaller invitationals. Sargent hosts a hybrid invitational/league meet on the Monte Vista golf course each fall during league meet week. The meet is dubbed the Eric Wolff Invitational after the highly successful young Sargent coach whose life came to an untimely end in the early 90s.

Aside from these meets, the San Luis Valley schools travel over a lot of passes to meets in Pagosa Springs, Gunnison, Salida,  Pueblo, and a few other locales.